The Ups and Downs Don't Matter 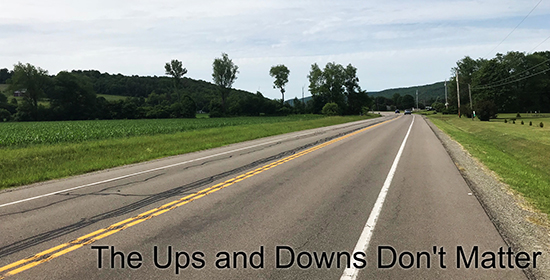 I had a great weekend of training. As some of you know (because I've been whining about it incessantly), my health hasn't been the greatest lately. However, on Friday I swam a mile in the pool, which I haven't done in 3 months. On Saturday I biked 40 miles and on Sunday I ran 10. I haven't done that much distance since Seneca 7, which almost killed me.

It's a relief to see my fitness coming back. Cooperstown triathlon was great, and I'm really excited for the rest of the summer. Whether I feel good, or I feel terrible, I exercise as much as my body allows. I was just thinking about this recently. While I was sick, I was worried that I would lose my momentum, that I would get used to sitting around the house on my a$$. Those worries were overblown, because I had no problem pushing the volume 3 days in a row.

I follow a lot of friends - fellow endurance athletes - online, many of whom are now starting their race seasons as well. Some of them have great races. Some of them do not. For some, their training goes the way they'd like. For many, it doesn't. For a few, they got totally sidelined by injuries. I know though that in the same way I jumped back in as soon as I could, they will too.


An analogy comes to mind, something about forests and trees. If you're biking and you crash into a tree, that tree seems like a pretty big obstacle. There's a whole big forest.... ok, nevermind this analogy. The point is that it's very easy to obsess over a temporary hardship. If we take a week off work, we're not worried about losing our jobs. Well, ok, I don't work in a sweatshop or at Booger King (whichever is worse), so maybe some of us do. In any case, if we take a week off exercising, we immediately worry about losing fitness, or at least being less prepared for a big race than we'd hoped.

That was a difficult paragraph. Maybe I should write outlines for these posts before I start. Moving on.

I've seen many people push extremely hard in their training. Maybe they want to qualify for Boston Marathon. Maybe they want to get a huge PR at their next race. Maybe they're seeing a lot of progress and don't want to stop. I've also seen many of those people crash hard. They get injured. They get sick. They burn out. Some bounce back. Some don't. I've experienced this pattern myself.

Even if all the stars align and your body holds together and you crush all your goals, someday you'll get old and stop getting PRs. That's just reality. Sorry. Some people transition gracefully. Some.... do not.

Why am I being so depressing? I'm not trying to crush your hopes and dreams. I've seen plenty of my own hopes and dreams crushed. Yet I'm still out there training. This past weekend was about half of what I was doing around this time last year. Yet I was happy and excited to see it. The weather was beautiful and I loved being outside. I worked hard and I felt good. I felt strong.


Training is my identity. After a while the ups and down, the successes and failures, stop mattering. The last two summers, I had months where I traversed over 500 miles. Yet at the time I was depressed and kept telling myself I wasn't a real athlete. I told myself I was a poser, that I only pretended to be an athlete.

My volume the past few months has been much lower. Despite being physically weaker though, I've been feeling a lot more positive about myself and about my life. I no longer punish myself with guilt and shame on a daily basis. I exercise every day that I can. I just accept that about myself. I went and did Seneca 7, even though I wasn't sure I could handle it. I'm accustomed to pain and suffering.

Because I'm an athlete.

When I see a friend struggle, I just want to grab them and say, "this doesn't matter. It doesn't change who you are. You are still an athlete. You are awesome." 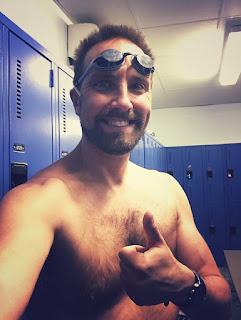 This was the second time I did Cooperstown Triathlon. I did it last year, and it almost killed me. I wish I could say it was nearly fatal in some unique and hilarious fashion this year, to get more clickz on the blog. Sadly, the weather was perfect and I think I only saw one deer on the road. Though I did fall asleep at an outdoor concert later that evening.

The most exciting part was that I did the race with my brother, Alex. It was his first triathlon ever! I sort of forced him into the pool last year, though he had to have a certain measure of crazy already inside of him to agree to get up at 5:30am to go swimming. Turns out he liked it! Then I signed him up for a triathlon and bought him a wetsuit. So he was trapped.


Alex and his ladyfriend Audrie arrived Friday morning from the distant planet they reside on (Massachusetts). After hugs and high fives, we went to Cowanesque Lake to swim and practice transitions. Alex had never swam in open water, and had no clue what to expect come race day. So we set up a pretend transition area, put on our wetsuits, and jumped in.

There weren't any sharks, not even a stray boat. Although while we were putting on our wetsuits, a lass did come over to tell us that our butts looked fantastic. That really happened. Though she apparently was walking around paying everyone compliments. Still, the wetsuit is - um - tight and revealing. Audrie ate french fries and sunbathed while we were splashing, pedaling, and running.


Afterwards we went home and "carb loaded", meaning we ate too much food. We also stayed up far too late watching Amazon Prime (Men in Black 3!). We set the alarm for 3am. I think we got 5 hours of sleep. We drank.... a lot of coffee. We haphazardly threw our things into bags, loosely tethered the bikes to the car, and hit the road in the middle of the night. Audrie slept in the back seat the entire way.

The sun rose. We stopped somewhere to pee. Alex and I talked extensively about Burrito Bison. It's impressive how much you can say about a little iPhone game when you have have 3 hours to kill. I think I only hit the rumble strips once, and the deer we saw was only mildly suicidal.

We got to the park and it was a perfect day. We got our bibs and chips, set up our transitions, and drank more coffee. Somewhere in there I had two poops, making it five for the day, which is almost a record. We put on our wetsuits and got ready to go. I couldn't wait to get started, and having Alex there reminded me how exciting my first time had been. He was going to get to experience flailing limbs and zig-zagging swimmers for the first time!

There was no shortage. I only passed a couple of swimmers who couldn't swim straight for the life of them. Alex, however, was farther behind me, and got to "enjoy" the full smorgasbord of crazed swimmers. Here's my public service announcement for newbie triathletes: Do NOT do backstroke in a tri. Seriously. Just don't. It makes you a f*cking a$$hole.


During the swim I discovered that "no tears" baby shampoo is a lie. Fog-free goggles don't do much good if you have to squint your eyes. Or maybe the guy in front of me peed and it got into my goggles? Maybe I shouldn't think about it too much. I got out of the water, through transition, and on my bike. Weeeeee.

I powered hard on the bicycle. It was "only" 18 miles (actually 19). I didn't plan on leaving anything behind. Let these other guys and gals bicycle intelligently. I smashed through the wind and hills and careened down steep declines at break neck speed. The course director called the route a "double lollipop", but the map looked absolutely nothing like a lollipop. It was more like a double rectangle with a flaccid tail. Flaccid has two C's? Huh.


My body still wasn't all there after nearly dying over the winter. I was just hoping it would hold together for the race. I got through T2 and started running and was fairly certain I would survive. The run course was also a "double lollipop", but what it really looked like was a deflated blimp. Also with a flaccid tail. As I ran I remembered, "oh right, this is the run course where you have to run up a giant hill twice." It even had the same sign on the course as last year: "Smile. You get to run this hill twice."

I smashed that hill and passed a bunch of people. I was feeling pretty rubbery on the last mile but I kept going. I even had the satisfaction of squashing a guy right before the finish line. Not literally squashing. I didn't pull a Super Mario Brothers. I mean, I passed him. As usual the photographer caught me stopping my watch.

Alex did really well for his tri as well, and he had a lot of fun! I liked running when it was all I did, but I don't think I could ever go back to "just" running. Triathlons are just too much fun! I think my brother has caught the bug as well. Audrie made a great cheerleader, snapping photos and yelling her head off!

We drove back three hours with the full intention of napping when we got home. We didn't get the chance. We had many more adventures throughout the day. I didn't quite make it and fell comatose at an inconvenient time, embarrassing myself thoroughly. I set my alarm for 6am Sunday to make coffee for Alex and Audrie before they went back to their planet (Massachusetts). Then I crashed again and stayed in bed until noon.

Thanks to everyone who made the race possible and to the volunteers who told us to slow down before a sharp turn. Thanks to Alex and Audrie for making the long trek and being part of the epic adventure. And thanks to everyone who put up with me when my brain and body stopped working right. What hectic weekend! 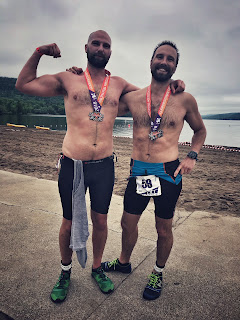