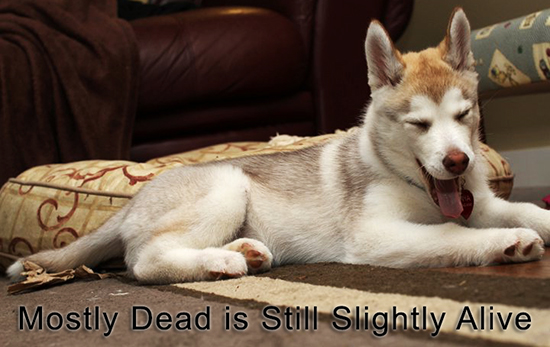 I haven't written anything in about 3 weeks. Nobody said anything, which makes me wonder how many people read my things. That's just me being extra sad for no reason though. I had a super terrible stomach flu for two weeks. I couldn't exercise, and I couldn't do much of anything else other than lie on the floor.

I'm finally slowly getting back into it. My workouts still feel weak, but it's such a relief to be able to exercise again. Most folks enjoy sitting around and relaxing. I usually do too. But being forced to, sucks. It seemed like everyone else was doing massive super strong work outs every single day, and I was lounging around in pain. I was convinced I'd lost 100% of my fitness.


Now I'm thinking maybe I've only lost like 80% of my fitness. Still enough that I think I'm going to die at Ironman Lake Placid after about 15 minutes. I've already had to skip all the races I signed up for in 2018 thus far. So it feels ridiculous for me to think that I'll be able to do a 140.6. Supposedly I did one last year, but I'm pretty sure it's a twin that I never knew about.

Or maybe an actor. An athletic actor playing me. That must be it.

This is how much being sick screws with my head. I know I'm just being stupid. I saw a doctor... I don't know when. At some point. She told me to drink lots of water. On the inside I was thinking, "I'm simultaneously sweating and freezing right now. My stomach feels like it's full of angry raccoons. I'm literally dying." On the outside I just said, "oh, water? Wow. Huh. Ok."

I've been sick before. I've been injured. I've seen many friends get sick or injured as well. There's all of the usual feel-good statements. Your body needs to heal. You'll come back stronger than ever. But when you sit there hour after hour, feeling your strength bleed away, it's hard to feel upbeat. I already feel like I don't train enough. So when I can't train at all, it's a special sort of torture.


There was a time, years ago, when I would often go two weeks without exercising. At that time it didn't seem like a big deal. There would be a nice day and I'd finally go for a run. Or I'd get tired of walking past my bench press every day as it silently judged me. Before my first marathon, I ran about once a week. It's strange to think how much I've changed since then.

It's also reassuring though. As much as I liked hanging out on the couch, I was itching to get moving again. It's a part of me now. It's something I need to do. If I don't run, or bike, or swim, or lift, I feel off. I don't feel right again until I've worked out. As much as I whine about not being an athlete, I want to move my body every single day. Even if I sometimes miss a race, or don't perform as well as I'd like to, I still have a dedication to keep training and to make sure that as long as I'm able to start, I'll be able to finish.

Last winter was terrible for me too. I have to remind myself of that. Even though I feel behind on my training now, I felt the same way last year. It helped put it in perspective for me. I was pretty miserable the past couple weeks, but I wasn't depressed. I just resigned myself to it and took it in stride. That's a pretty big deal for me. I may be unhappy when I'm sick, but I don't allow myself to get stuck in downward spirals anymore.


There are people out there who have it much worse than I do. I'm quite blessed that I have the time and strength to pursue my goals and train. It's challenging, but it's a challenge that I have the opportunity to take on. A lot of folks have challenges that they have no choice over. I can only imagine how frustrating that is. For their sake, I can't squander what I have.

Yesterday I swam at lunch and I ran after work. They were both very short workouts, but I still experienced a feeling of freedom as I glided through the water and felt the cool air on my skin. I had forgotten that feeling. When I train every day I take it for granted. When I haven't been able to do it for a while, it feels exhilarating.


Maybe it was a blessing, a reminder to me of why I do what I do.

And come Lake Placid, if I don't feel quite prepared for it, I'll just hire that actor again.

PS. I hope everyone knows what the quote in the title is from.
Posted by Peter at 12:18 PM