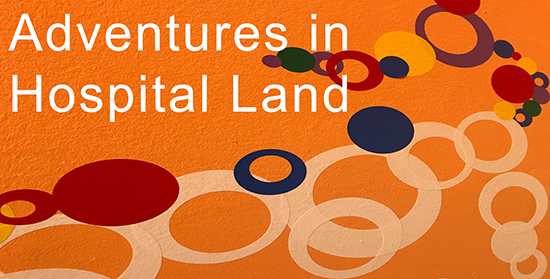 Last year I had an issue that hampered my training. I went to the doctor then, and that helped, but it lingered all the way past the Ironman. I think there's a good chance that it had a larger effect on my training and racing than I thought. Certainly I've whined more than once about how everyone else seems to be able to do so much more than me.

After my last post, it came roaring back like an angry shark. A good friend said it's not normal that it keeps recurring and that I should go to the doctor. I'm not a fan of doctors, but I've already lost a month of training and it didn't seem like it would go away on its own. So I went.

I went to my primary care physician. Well, first I drove around the business park and entered half the buildings until I found the right one. This is especially sad because I've been there before and the exact same thing happened last time I went. I swear they switch buildings every time.

I did the patient thing, which involves a lot of waiting but not as much as I expected (all the real waiting would come later). They asked me questions about all my filthy habits. They took some blood. They poked me and asked if things hurt. Finally my doctor decided that whatever I had was not great, and that I needed an immediate CT scan.

A CT scan! I was excited. I'd never had a CT! I had to go to the next building over. I had to wait more. Then I had to drink a bunch of sh*tty orange juice. And wait more. With a needle in my arm. Which I took a picture of. The whole time I heard the recorded voice from the CT room saying, "breath in. Hold your breath. Breath normally."


Finally it was my turn! I felt like I was in an episode of Star Trek. Maybe I'm just easily amused. I lay down on the table. They connected a tube to the needle in my arm. They told me I'd feel a cool rush as the contrast fluid went in. I looked at the container the tube was attached to. There was like a bathtub worth of contrast fluid! I was like, no way they're putting that all in my body. I'll explode!

I don't know where it all went. I was expecting myself to inflate like a balloon. And it felt super weird. You know, in a fun way. The table moved back and forth. The voice said, "breath in." I breathed in. It said, "hold your breath." I held my breath, the whole time worrying that I was f*cking it up somehow. Then it said, "breath normally." I panted like a dog on a hot sunny day, panicking that I wouldn't get enough air. That's a thing that regular swimming does to you. The CT made epic sounds, like it was activating its warp drive.

Then it was done. I almost asked, "can I go again?!" Like it was a carnival ride. I had to wait some more while my doctor magically got a copy of the results via some technological wizardry (probably email, but maybe via mechanical messenger boar?). Finally the doctor called and the lady who attended me (I'm sure she has a title and I'm being super rude by not knowing it) answered and handed me the phone.

The doctor told me to go to the hospital for more tests. She told me I'd be there for a night or two. A night or two! I'm like, am I dying?! She told me I could drive myself, that I didn't need to ride in an ambulance. Wow! Thanks doc!

I went out in my car and sent some TXTs and messages. I had earlier posted a silly thing to "My Story" (which is a thing on Facebook I've never used before) so some folks were already blowing up my phone. I was kind of surprised. Which made some people mad, like, why are you surprised that people care?!


I drove to the hospital. Then I sat in the parking lot and answered more messages. Folks were concerned about me being alone. I was like, this is an exciting adventure! I didn't think I could say that; I was expected to take it seriously. I could be dying! So I tried to treat it with some gravitas, because I didn't want to make my friends more angry with my lack of terror. You could argue that I was in shock or didn't know how to react. It's a week later now though, and it doesn't feel like it was an out of body experience or anything. But then, I know from previous experience that I treat stressful situations with calm. Like when my rental car got totaled (did I ever tell that story?).

Someone did come to see me in the hospital, and truth be told, I was super glad for that. Before they came though, I had to wait in the waiting room for a long time. Before that though, I went into the wrong door and confused all the nurses. While I was waiting, I did some work on my laptop, even though my boss told me not to. I ended up doing more work while waiting in the ER too (spoiler alert!).

Finally I got into the ER. They didn't have any rooms available, so I hung out on a gurney in the main room. I had no clue I'd be in that exact spot for the next 5 or 6 hours. Occasionally they'd position curtains around me if I had to, I don't know, pull my pants down or whatever. They took a ton of blood. I was complimented on the color of my blood (it's super dark and rich with robustness!). I peed in a cup, which sat next to me, full of pee, for the duration of my stay, balanced precariously on the bed rail. Is that a run-on sentence? I don't know!

I was engaged though. There was lots of activity. I chatted with the nurses and volunteers. They were nice. I made them laugh. I had to wait a lot. I did some work on my laptop. I screwed around on my phone. My friend came and that was awesome. I wasn't allowed to eat or drinking anything; I hadn't eaten at all that day.


After many hours, the doctor (who had a disappointing handshake) told me that I had a super terrible thing that would change my life forever. He started with, "don't panic, but..." I didn't panic. I just stared at him like my cat stares at an unfamiliar person. I knew there were questions I should ask, but I was like, "ok, thanks." I think this happened while my friend was getting me a sandwich, which I was finally allowed to eat! It was around 4pm. I'd been doctor-ing for about 8 hours by then. Patient-ing?

The doctor told me he was going to consult with another doctor who specialized in my terrible thing. That required me to wait another couple hours. I told friends and family that I had a terrible thing, but that I wasn't dead.... yet? Maybe not the right way to express it. I think I just worried them more. I'm really not good at being a wounded puppy. I was still generally chipper, having a good time, despite the waiting.

Around 6, the other doctor finally came over. He had an Irish name, which I didn't realize until he made a joke about St. Patrick's day having just passed. I'm obtuse. He told me that my terrible thing was presenting really strangely and that he wasn't sure it's what it was. I just said, "oh good." Maybe I just hadn't processed everything yet? I'm sure some people will say I was totally in shock and that him giving me potentially good news cancelled it out before I could feel upset and that I'm just lying to myself.

Who's to say! It's part of the adventure of life.

He said I maybe don't have the thing, and he gave me a prescription for antibiotics. So that's good! That was a week ago, and I'm definitely feeling better. I have a follow up tomorrow so we'll see what's going on.

I finally left the hospital around 7. My friend had left before then. I got home after 8 and did some more work on my laptop. Then I lounged around. I had missed my couch.


I don't know if that's all normal. The times I generally feel down is when I'm stuck in my own head for too long of a time. When something like this happens, with lots of changes and stresses and new people and environments, I get pretty excited. When I'm out of my head, I'm happy. So despite everything, it felt like an adventure to me.

Maybe it's a defense mechanism? A way to not take things seriously? That's possible. I'm generally not a fan of real life things. Certainly I treat difficult things with humor if I can. When it comes to my friends, I hate to bring them down. I didn't want anyone coming to the hospital because I felt like I'd be putting them out. That's the thing that bothered people. Like I offended them by saying that I didn't need support.

It meant a lot to me, all of the love and outreach I received. I was really blown away by it all. The fact that my friends didn't want me to struggle alone was amazing. They were willing to turn their days upside down for me. I'm really not used to that. I'm willing to sacrifice myself for people I care about, but I don't want them to do the same in return. That's selfish of me.

If you're reading this and you were one of those worried friends, thank you! It meant a huge amount. It really did! I didn't mean to belittle that caring. I was just caught off guard.

I don't know how this will effect my training in the long run, or what the doc will say tomorrow. Oddly, I'm not too worried about it right now. I'll just train as much as my body allows. Perhaps this all gave me perspective on what matters. The people in my life matter, number one. The love they give and the love I return.

If I can't race, I can't race. My identity will change. Who I am outwardly will change. That's happened a lot in my life and it will continue to happen. That's fine too. I've experienced enough guilt to know how useless it is. It's not a certainty just yet though.

I don't plan on giving up just yet.


PS. I know it's a terrible post title. It was fully justified (font-wise) without any extra work. That excites the nerdy part of me. So I didn't change it.

PPS. Seriously though, you people are amazing. Thank you thank you thank you. Maybe the reason it went so well is because of all of you. And by "maybe" I mean "almost certainly". See? I can learn too. Hearts.
Posted by Peter at 12:26 PM