Why Do You Train? 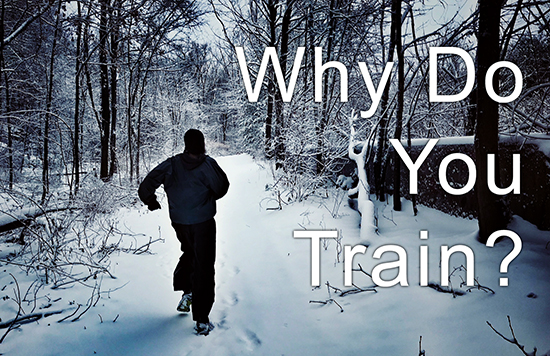 A lot of folks struggle with their training. It's normal to doubt yourself, to question why you're training, to scramble for motivation that simply isn't there. It's easy to look at other athletes and think, "she's amazing," or, "he makes it look so effortless." You can get stuck in your own head and convince yourself that you're the only one having trouble, that you're missing some critical piece of the puzzle - a piece everyone else has. But it's simply not true.

Even the most talented athletes struggle. Especially the talented ones.

I was sick this past weekend. I'm still getting over it. I also have some sore tendons that worry me. I've read research that says extensive cardio destroys your heart. And I have all sorts of others things digging around in my mind. And I know my friends are struggling as well, for varying reasons. It's especially bad in the winter, when the days are cold and short, and race season seems so far away.

It's especially important right now to know the "why". Why do you train?

You can point to a race you signed up for and say, I have to train for this race. But that's not enough. You can skip a race, or defer it. Or just show up and do the bare minimum to finish so you can collect your medal and eat pizza. Or do it halfway, bonk out, and come up with excuses for why you failed and get reassuring pats on the back from your friends.

I've been caring less and less about races. I prefer to do them with friends, to pace someone. In which case my pace doesn't really matter. I just have to have sufficient fitness, which I can have without killing myself. I stupidly signed up for the Beast of Burden 100-miler, but I have absolutely zero attachment to it. I'll go as far as I can and then hang out to support my friends.


I've signed up for not one but two Ironmans because Meghan and Geoffrey signed up. I don't even know what the reason is there. Ego? Is it to prove I'm as good as they are? As tough as they are? Is it because I want to participate in an epic adventure with two of my best friends? Is it because it's something I was too scared to do on my own but they happened to light a fire under my a$$?

It's probably a little bit of all of those.

Someone I care a lot about recently told me I should do it for ME. But.... it's not enough. I've never wanted to be the best at anything. All my life I've wanted to be a jack-of-all-trades. I like to be able to do a little bit of everything. I've studied many different languages, rather than trying to become fluent in one. I've dabbled in many art forms - photography, cartooning, writing, digital design - without focusing on any one. Triathlons fit in well for me because I get to do a little bit of three different disciplines.

It's not about fitness either. I can be fit and healthy without doing an Ironman. In fact, as I mentioned, research shows that such an extreme volume of endurance training can actually be unhealthy. It used to be about vanity. About showing off my workouts and selfies to get validation from strangers on the internet. But I've mostly moved away from that.

So what is it? Why do I train?

I didn't have an answer to that question until I typed it out. I know, some of you still think my posts have reason: a moral at the end. They often don't.... at first. But they help me coalesce my thoughts so I can answer my own questions. What's the answer to the question? For me?

I hate being average.


Maybe it explains some of the other things as well. Maybe it's not about vanity or about showing off, so much as it's about saying, "look, I'm not average; don't call me average." Maybe it's not about being just fit. Plenty of people are fit. But a very minuscule proportion have completed an Ironman.

And every time I sit and think, maybe I should relax, maybe I don't need to push so hard.... I feel a pain. It's almost physical. It rages within me. It's not my body. My body is usually in pain. It's my spirit, screaming, don't you dare lock me up. My spirit isn't interested in the limits of my body. It's not interested in the tribulations of my mind. It just wants to experience the richness of life: The depth and breadth of it.

I can't do that to myself. As exhausting as it is to my body, it's also liberating. I see it in my friends, when they cross that finish line. It's a feeling that transcends mere physicality. It's a moment of such glory and such beauty, that for a moment you feel utterly beyond yourself. I've seen it on their faces, and I've experienced it myself.

There's no other way to achieve that. It's nailing your violin solo. It's acing your graduate level exam. It's making a sculpture that's just perfect. It's crossing the finish line at Ironman. But if you settle, if you just coast along through life, you will never experience that.

It's not easy. It takes an obscene amount of work to get to that one glorious moment. It's not just about the prize though. That work defines you. It's what sets you apart. Because most people don't have the stamina. They don't have the discipline. But you do. 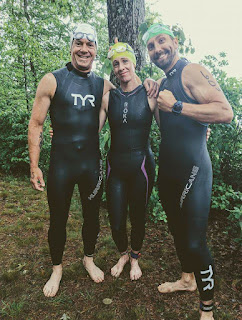