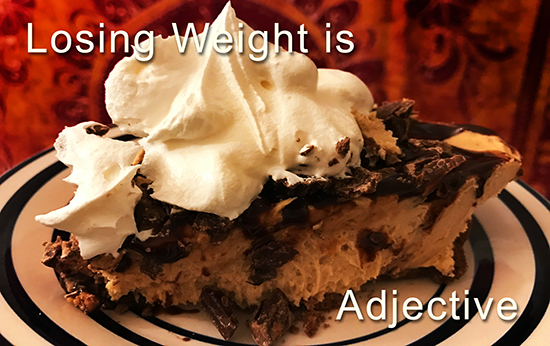 It's hard to believe, but I've been counting calories for over 4 years. That's not to say I'm always within my budget every week. I put on some weight over the holidays. I wasn't too concerned. I wanted to be able to enjoy myself without feeling stressed or guilty.

This month I went on a stricter diet and lost that weight. I can't say exactly how much, but it was about a pound a week. You're probably curious about what I did. Everyone's always looking for diets and weight loss plans (hyperbole notwithstanding). Unfortunately, most folks look for easy diet plans, or ones that take little effort or change. I'll share what I did, though many will shrink in terror and go back to their milkshakes.

I cut out simple carbs. Sugar, number one. That's something I rarely eat anyway, although I had a bunch over the holidays. So I cut that out. Again. I also cut out bagels, bread, popcorn, pasta, etc. I allowed myself rice, quinoa, farro, and the like. To the astute reader, this means I cut out everything delicious.

I probably missed bagels the most. I was used to eating them every morning for breakfast. Instead I had eggs, usually with a side of avocado. Still tasty. The interesting thing I found was that I felt more full eating just eggs and avocado than if I had all that on a bagel (with cheese!). There's a bunch of science behind it. But the short story is that eating nutrient dense foods satiates you, and empty calories do not. There's also something that happens when you eat carbs and fat together that short circuits your brain.

Most writers would now delve into a bunch of science to explain it all. I'm pretty lazy. I read a bunch, remember the things that matter, and discard the rest. I know that potato chips, breakfast cereals, pizza, and so on are "bad". So I don't eat them. I think that's pretty common knowledge. If someone says, "you won't change my mind unless you scientifically prove it," I won't care.

If you want to be fat, then be fat. My body fat is around 10%. I get plenty of compliments. So I must be doing something right, if only by accident. I exercise a lot too, but exercise doesn't make up for a bad diet. That's the painful fact. You only get healthy and get in shape through sacrifice and hard work. Eating is no different.

On the plus side, you do get used to the change. It's the same with training. It takes 2 or 3 weeks to get used to a new routine, but once you do, it becomes much easier. So I may actually stick with eating just eggs for breakfast. I do plan to add some carbs back in. Pasta for sure. And probably nutritious bread as well.


I appreciate the challenges of eating healthy. Many many people struggle with it, clearly. Over the holidays I struggled too. Though the reason was that once I said that sugar is "ok", I didn't have much holding me back. I suddenly had to resort to willpower. Willpower! Willpower sucks. It's worthless. It works for like two minutes and then you're drowning in donuts.

I have people tell me I should just moderate. That I can eat what I want as long as I moderate. These are people who have been skinny all their lives because they have this beautiful magical quality of moderation. I do not. I envy them. To me, moderation is a dirty word. I'm so bad at it that I don't even realistically look at it as an option. Because I will try it, fail, and feel guilty for failing. That's a whole lot of negativity for very little gain.

So I have to say that certain foods are "not ok". And then I just plain stop seeing them as things I can eat. When sugar goes on the "not ok" list, I stop being tempted by it. It goes on the same list of things I can't eat along with chairs, cats, and steering wheels.


I realize this is weird. That not everybody works this way. Of course everybody knows that if they ate less sugar they'd be healthier. And eating no sugar is even better. But sugar is super delicious. And nothing bad happens right away. However, something good does happen right away. You feel great! You feel fantastic! Life is suddenly amazing!

The problem is that the bad parts of sugar don't happen until later. And the benefits of cutting sugar also happen later. And we as a species kind of suck at planning for later. We want to do stuff that makes us feel good now. So, I basically have to screw with my brain. I have to trick it into thinking that there's an immediate cost. I feel guilty. My calorie app goes crazy, which makes me unhappy. And so on. A similar strategy applies to training.

I think a lot of people feel guilty for eating unhealthy foods, or for not exercising. But they usually don't do anything about it. Guilt by itself isn't a solution, and it really ends up making everything worse in the long run. Many people who feel guilty about their eating... deal with that guilt by eating more. It's like a drug addiction... actually it's very much like a drug addiction.


But, when you start seeing success, it becomes addicting. You want to see even more success! And once you see enough success, you find yourself on a new path. One of constant growth and increasing happiness.