Lasting Change is Hard (But These 5 Things Help) 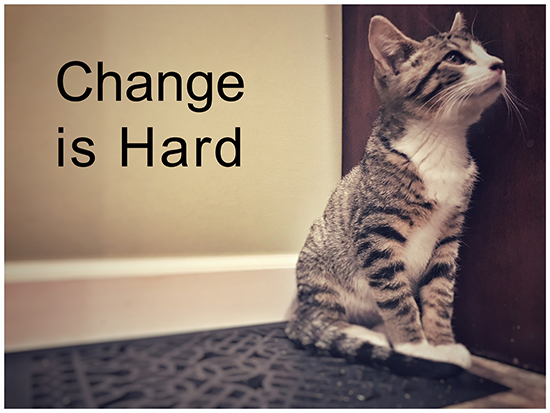 Some people recognize that some aspect of their life isn't working. They make the painful realization, swallowing their pride. They make the decision to change, despite the challenge and scariness. They get on that long road and dedicate themselves to change. And they stick to their decision, ignoring their mind's attempt to second-guess itself. And they come out the other side better and stronger people.

That's some people. A few. A handful.

Most people don't do this. They make a vague promise (to others or just to themselves) to fix some part of themselves. They may make a halfhearted attempt to work through it. Maybe they do a Google search for easy solutions. They mention it to their friends, to get that encouragement and validation. They spend a couple of days dipping their toes in the water. And then they go back to the comfortable life they're familiar with, coming up with an excuse for their failure. "I'm too busy right now"; "I'll do it when I have more money/feel better/have more time"; "I'll do it when I find the best way to do it." Nothing happens.


So why is it that some people are able to make the hard choice to change and are able to stick with it no matter the challenge, while so many others fail?

Sometimes change is necessary to avoid something catastrophic. Maybe the doctor tells you you'll die if you don't lose weight. Maybe you'll lose your home or the life you're accustomed to if you don't change your spending habits. Maybe you realize that a feeling of depression or loneliness won't go away by itself, and nobody else will fix it for you.

It's never been anything critical for me. I've always had to trick my brain into believing that if I don't do a particular thing, that disaster will befall me. If I don't exercise, I'll die. If I don't pull myself out of self-imposed isolation, I'll die. And in a sense I would. It may be a death by a thousand cuts, but the end result is the same. Many of us don't even notice our happiness slipping away. We get used to it and just try our best to stick to the status quo. Until one day it hits us, at which point digging out of it seems too daunting.

But whatever it is in your mind, you have to remember that consequence. Once you start on the path of growth and improvement, you feel good. Even if everything isn't immediately better, you still feel better just to be doing something about it. And it can be easy to let that feeling mollify you back into complacency. You have to remind yourself every day the reason why you're doing what you're doing. Allow yourself to feel that urgency, that fear of failure.


There's a risk to that too. Certainly you can go overboard in the other direction. But this often is a necessary step before you can find a happy medium. Real change takes a long time. But after a while, you no longer worry about the consequence of failure. You start seeing the consequence of success!

I don't have too much trouble getting up to do a workout, even if I'm exhausted or in pain. However, I do exercise more - and enjoy it more - when I'm doing it with my friends. And I work harder and aim for bigger challenges when my friends push me to do so (either directly, or just by inspiring me). Additionally, I've been able to gradually shift my goals. Rather than obsessing on performing to a certain level, which often left me disappointed in myself, I can now focus on doing it for the joy of it.

For those who do struggle finding the daily motivation, having a support system can be extremely beneficial. Having a running buddy who holds you accountable helps. Signing up for a race with others who are doing it helps. Competing (in a friendly way) with your friends online helps. Looking forward to adventures that involve physical movement helps. And this is true for any goal.

This does mean having the right social circle though. If you and all your friends prefer to drink beer while watching TV, and you suddenly decide to quit drinking, or start exercising, or stop wasting money, they're not going to support you in that. In fact, they're likely try to drag you back into their fold. It won't be malicious, they just miss you. But it will make it much more challenging for you to keep at it. If you and your friends often engage in negative talk, and you make the effort to become more positive, they'll be incompatible with that goal.

That's hard. Nobody wants to lose friends. And making new friends as a grown-up is tough. I read an article on HuffPost that said so. I haven't lost all my old friends. Some I have. Some I've just drifted away from. Some have accepted the new me, or even changed with me (which is rare but awesome!). Social media makes the transition a lot easier. I've met a huge number of amazing athletes online, and have then met and trained with many of them in person. They're all truly incredible people.


Thanks to those new friends, I'm happier and in a much more positive mind frame than I was before. Which means I can reconnect with old friends from a place of joy. The more you give the more you get! Crazy but true.

I have some friends who are very ambitious. They're proactive and seem to manage all of the vagaries of life with aplomb. Not me. I'm "creative". I prefer to be "stress free". I very often describe myself as lazy. I grew up with a terrible work ethic.

There are some who say that today's "millennials" have grown up spoiled and self-entitled. That they've been ruined by helicopter parenting and too-easily achieved trophies. Some would say that technology has ruined our capacity for critical thinking and real social engagement. Some would point to the great number of college graduates still living with their parents. Of course, there's two sides to all of those coins and it's outside the scope of this post to argue that. But the point is that all of those qualities, if they're true, make it more difficult for one to push themselves to personal growth.

People may point out your flaws to you, but ultimately it's up to you to seriously think about who you are now and where you want to end up in the future. This can't be done with self-judgment or recrimination. It requires setting aside your ego and being honest with yourself. That's hard. It's easier to just float along, filling your life with electronic or chemical distractions.


You will find things about yourself you don't like. There are some things you can change. The other things you will have to accept, forgive yourself for, and move on. I'm not a super motivated guy. I can't force myself to be, because it just leaves me frustrated and angry at myself. I not only accomplish nothing, I actually end up moving backwards. So I accept who I am and work with what I have. By focusing on the things that make me happy and bring success, I can continue to grow. And interestingly enough, I end up becoming more motivated along the way.

Replace an Old Addiction with a New One

Some people are awesome at self-moderation. That's great; I'm jealous of them. Some of them tell me, "you don't need to quit ice cream; you just need to moderate." I can't do that. And trying to explain that just makes me sound f*cked up. We all see the world through the lens of our own experiences. People who are great at moderation don't get why I can't just.... do some of something. Rather than all of it or none of it.


Exercise is an addiction for me. It's a better addiction, I feel, than drinking or partying. Geoffrey quit smoking and took up running. He quit drinking and took up triathlons. He needed to replace one with the other. And he's happier and healthier for it.

If you don't have an addictive personality, this may not help. If you do though, think about what you can give up that's unhealthy. And consider making your goal (it doesn't necessarily have to be fitness) an addiction instead. Use every tool at your disposal. Turn your flaws into boons.

Part of the challenge of effecting change and taking on a new endeavor is that it feels like work. We live in a society of quick rewards and instant gratification. It's hard to do things that don't have a fast dopamine response.

This changes when you start seeing positive results. You lose weight. Or you produce a nice work of art. Or you get positive feedback from people. Or you just feel better. It's easier to keep doing something if you feel like it's leading towards success. However, many folks quit before they ever get that taste of success.

This can be a double edged sword though. If you've come to expect constant improvement, you can be disappointed by a failure or setback. With training this could be an injury. With many other skills it can involving hitting a plateau. Or real life can bite you in the face and stall your momentum. Any of these things can kill your desire to continue.


In either case, it's important to have your own metrics. Instead of having an expectation of quickly becoming amazing, which never happens, you have to look to the daily victories. Every day that you take an active step towards your goal is a success.  You can consider each step as its own goal, and you can measure those steps. If you practiced the drums for ten days, you may not think you've gotten any better yet. But you can take pride in that you did it for ten days. You can look on a calendar, or in your diary, or in an app on your phone, and see that number ten. Then the next goal is to hit 11. And so on.

Success isn't defined by hitting a specific target. That's an expectation. And expectations often lead to disappointment. Success is a state of mind. There are many folks you would point to and say, "she's successful." But that person got there through diligence and hard work. And it's quite unlikely that they look at themselves in a mirror and think, "I'm successful." They're constantly in pursuit of it though, no matter what. And that comes from an attitude. And even if they may seem successful to you and me, they're not done persevering.

You can't look at your effort as work. Work is a thing you do so you can get food and stay alive. You have to look at it as a blessing, something you get to do, that will result in an overall improvement to your life. It just takes a while to get to that point. So you have to take satisfaction in the fact that you're doing it, because many people don't even get that far. Be proud of it!


Change is hard, but it's not impossible. There can be weeks, months, even years in which you feel lost. Losing your identity in an effort to find a new one is terrifying. Many prefer to hold on to the familiar, as mediocre as it is, in lieu of diving into the unknown. At least they're comfortable with what they have now, if not happy.