I get ten days off work for the holidays (including the weekends). I tend to think of it as an opportunity to exercise a huge amount. In 2015, I ran 58 miles over the break (71 if I include the Friday before); I had one bike ride. In 2016 I ran 72 (or 86 including the Friday). I also biked and swam a lot, and probably lifted. That New Years I ran a solo marathon at midnight.

That volume of training destroyed me for the first few months of 2017. Utterly destroyed me. Which impacted my training for- and performance at -  Ironman Mont Tremblant.

This holiday break.... I'm lazying a lot (and eating a lot!). I've biked twice so far, swam once, and have run a total of about 10 miles. I still have 4 more days, but I doubt I'll get anywhere close to last year's numbers. And that's a good thing. I had considered making my new year's marathon an annual tradition, but this New Year the temperature would make even a polar bear freeze.

I signed up for the Beast of Burden 100 mile ultra in February, but wrote that I no longer plan on finishing that, but just going as far as I can without breaking myself. I'll still get in my long runs, but I'm not going to obsess over getting in 50 or 60 mile weekends.


Essentially, I want to train at a level my body is capable of. I no longer have my ego tied up in appearing bad@ss. I barely even post my workouts anymore. It's not worth showing off if it just leaves me constantly broken. And I have more positive things to look forward to than impressing a bunch of people I don't know online (sorry reader!).

I still love to train. That will always be a part of my life. And I'm at a point that I will train every day (or just about) without having to struggle with motivation. I bicycled for an hour and a half yesterday while watching Bright with my family. I swam a mile with Lois on Saturday morning while her kids antagonized their grandparents. I had a delightful and adventurous 10k through the snow with my friend Dan on Christmas. What day am I missing? Ah, I went to the gym Sunday with my brother and his girlfriend; I hit the treadmill and some free weights. 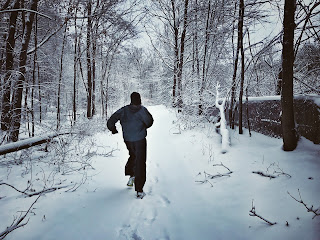 Those were all FUN. And they were still challenging workouts. I didn't go easy. I did intervals on the bike. I was racing Lois in the water. My arms were trashed after slamming some weights right after jumping off the treadmill.

I've written before that when you start a new thing, you sometimes push too hard before finding a happy medium. I'm getting to that point. I know what my body is capable of. More importantly, I don't have to kill myself to satisfy some image I have of myself. Life isn't a movie. After the hero blows away the villains in the Nakatomi building, he has to go back to real life. And if you watched the sequels, you'll know that being a hero didn't magically fix his marriage or make him happy.

I'm realizing that. The movies make self-sacrifice glamorous. The credits roll when the hero is still on his or her emotional high. It forever freezes that moment of glorious success. But that's not reality. Us regular people want to be happy, and we want to be lastingly happy. Breaking yourself.... that gives you poignant moments of feeling epic, with lots of exhaustion and depression in between. If you've followed my blog, you've probably seen my ups and downs.


It's not worth it. I'm ready to be the old guy in the rocking chair who occasionally drags himself to the starting line of a triathlon or trail run. I like writing, and drawing, and photography, and spending time with people I love. And I can't enjoy those things if I'm always exhausted.

That's hard to figure out. Happiness. It's such a vague thing. We all think we know what it means, but we don't. For a while I honestly thought that if I didn't have my training, I'd have nothing. I thought I was happy years ago, when I drank and partied and was a chubby pile of laughter. I was fooling myself back then. I still want piles of laughter, but I want it with people that I deeply love. That's the difference. Sharing your life with amazing people. 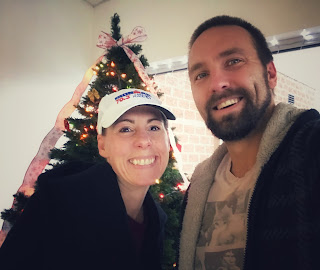 Loneliness sucks. I've battled it for a long time. A lot of it - most of it - was self imposed. I've lived with that image of the solitary hero for too long. That I had to do epic things in the night, showing that I don't need anyone, that I'm my own strength. Of course, I posted those things online, which just goes to show that they're bullsh*t. Ultimately, I was still seeking validation. And I was lying to myself about it.

That's the gift I've gotten this Christmas: The realization of what I want in life. And the willingness to go after it without my ego slamming on the breaks. My ego is still there, it's still the same ego that won't let me play monopoly without going into a frothing rage. But it's an old friend. I know how to pacify my ego, to throw it a treat every now and then so it goes back into its corner to happily chew on it. The rest of me, the rest of me will sit with my loved ones eating smoked trout and home made egg salad from local farm eggs.