Training Without a Coach 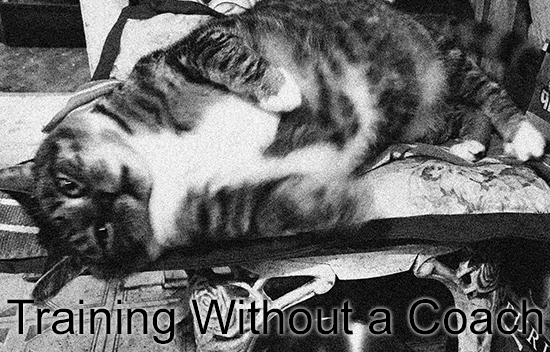 Some of my athletic friends - particularly the super epic ones - have a coach. And I can see the appeal. They know exactly what they have to do every day, without having to think about it and then doubting their decision. They don't have to worry about training too hard or - more importantly - not training hard enough. They have extra motivation to get moving, because they're being held accountable every day.

I don't have a coach, have never had one, and probably will never have one. I'm not saying that's wrong or right. I'm just writing this for perspective.

I like to sign up for races on short notice. I like to train with a friend if they invite me to. I like to switch or move workouts based on my mood. I like to squeeze in a workout if I have time or the weather is nice. I like to make a workout easier or harder depending on what my body can do. And sometimes if I'm feeling super trashed, I can flake on a workout and be OK with that.


A coach generally will get cranky if you sign up for too many races, as it interferes with your training schedule. They want to know months ahead of time, and even then they're like, "are you suuuure you have to do this extra race?" A coach will move, change, or cancel workouts if it's necessary. But when that happens, you feel extra guilty, because you feel like you're letting down not just yourself, but someone else as well. I already deal with enough personal guilt without piling more on.

And if a coach eases off your training because you clearly need it, you will be crushed by that. Crushed. Because all you'll hear is, "you're not strong enough to do this. You're not capable enough." Of course that's bullsh*t. But I know I feel like that, and I know my friends do too. That's just how we humans work. We take things super personally and beat the sh*t out of ourselves.

I know I don't train to my full potential. My friends remind me often. And I don't care. I know they care. That's why they have a coach. That's why you should get a coach: If you care. I don't. I've hated myself for it for a long time. That's why I overtrained and injured myself and did stupid things. I'm not the kind of person who's driven to be the best. I'm just not. And I know that. And I try really hard not to judge myself for it. I'd rather pace a friend in a marathon than try to race that marathon.


I've never had a good marathon. Never. Even the ones where I did well, I didn't feel I did well enough. And yes, I can work my a$$ off and keep on trying and keep on improving by little bits until I finally hit the goal I want.

That has zero appeal for me. Just writing that makes me convulse. I just proofread that paragraph and my stomach clenched.

I'm super lazy. I train almost every single day (I hate rest days). I do crazy things. Last week I did two back-to-back 20 mile runs. But I'm lazy. Maybe it makes no sense, but I am. I train exactly so that I don't feel guilty about being lazy. It's twisted but it's true. If I work out for 2, 3, 4 or more hours, then I feel 100% justified lounging in bed the rest of the day, and I feel super good. But before I've exercised, I can't relax. And I'm trying to learn to be OK with rest days, but they're still super hard on me.

Everything in my life is like that. I have friends that are Type-A. They pick a project and go at it full tilt until it's done to their satisfaction. And they do everything like that. Just watching them makes me exhausted. I can't do that. I have to be extremely picky about the things I choose, because I know that most things I'd like to do, I'll never finish. No matter how motivated I am. I was super super motivated to learn guitar. My entire family is musical. I really really wanted to learn to play. And it went nowhere. I don't even remember why I stopped.

Training I've been able to stick to. But only because I do it exactly my way. If I finally decided to quit "f*cking around", hired a coach, and started doing that, it would destroy my love for training. It just would.

That's all just me. If you would do well with a coach, then get a coach. The only real take away from all of the above is that you have to know who you are, and be OK with it. Feeling guilty for not living up to other people's expectations is what ruins you. You just can't do that. You can force yourself to be different, but it doesn't last. And in the end you're just left broken and miserable.

If a coach helps you be a better you, then do that! If not, then not.