The Bond of Pain 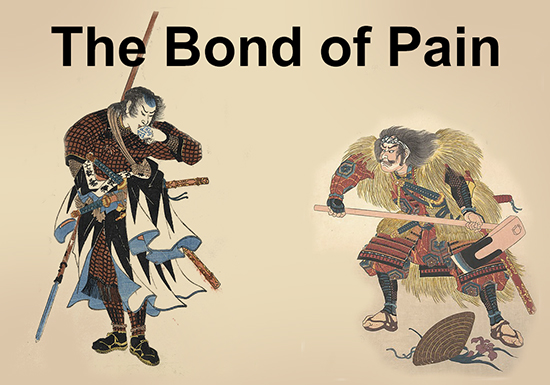 The title sounds like I'm going to talk about something kinky. I haven't quite breached that threshold yet in this blog. Probably for the better. I don't think anybody wants to know me quite that intimately.

I had lots of friends when I was in my 20's, or at least people I could party and drink with. Few, if any of them, were people I felt I could really count on. But in all fairness, it's unlikely they could count on me either. We mostly lived frivolous, lighthearted lives. We just wanted to have fun and not deal with anything serious.

The friends I have now are people I can count on. How do I know? Because it's not uncommon for us to try to murder one another in endurance events spanning many hours. If you're willing to say, "hey, let's do this brutally hard and painful thing together!", then fixing a handrail or helping with other real life things suddenly becomes trivial in comparison.


Even more than that, it speaks to their character. The friends I have work their a$$es off to make something better of themselves, and they appreciate others who do the same. We want to support one another in our ever more challenging endeavors. Sometimes that means smashing a tree in their backyard, and sometimes it means pacing them for 10 or 20 miles in the middle of the night.

I used to be selfish, really selfish. I never wanted to feel "obligated" to anyone. Guess what, I was alone. Even when I was surrounded by people I was alone. I didn't care about them - not really - and they didn't care about me in return. Oh sure, on the surface we'd be like, "you rock bro!" But if they asked me to help them move, I'd be scrambling for excuses.

I think the thing is that none of us really cared about anything, or at least we didn't know yet what was important to us. I certainly didn't know. I spun my wheels and squandered a lot of time and energy. People didn't know me because there wasn't much there to know. And it was hard for them to relate, and therefore to give a sh*t.


I know now what matters. And I have people in my life who also know what matters to them. And many of those things overlap. It creates a very powerful bond. When I help a friend, they help me in return. Though we don't think of it like that. There's no "points" to earn or redeem. It's just an ever lifting spiral where we all bring one another up to greater levels of happiness and success.

Training is hard. And doing it in isolation is very hard. Even when I was feeling depressed and alone, I was still posting stuff online for the validation. But now I'm not really training for the ego boost (well, ok, that's a lie, but not entirely for my ego!). Now I'm doing it for the community. I feel like the strength I'm building is strength that I can share with the ones I love. Many, if not most, of the races I sign up for, I do so because of the other folks doing them.

When I first started exercising regularly, I wasn't trying to join a community. In my mind, I didn't expect that entering on this lifelong path would result in meeting some of the most incredible folks on the planet. I didn't expect that I would find individuals that I cared for to such a great degree, who cared for me in return. I didn't even know that was possible for me.

I've written about my past before, that I came from a place of solitude. I thought I had missed my opportunity to become a human. When I was engaging in wild shenanigans in my youth, it was a distraction from that isolation. It didn't actually fill that hole in my soul; it just covered it up for a while. Now I realize I had just been afraid.


Why was I afraid? I was afraid of losing my freedom. But that freedom means nothing if I can't share that time with others. I was afraid of letting people down. Failure happens, but in the long run I contribute more than I take away. I was afraid of being vulnerable. But if we never open ourselves to others, we risk poisoning ourselves with compressed anguish.

Training is pain. When you are in pain, your are vulnerable. But it is also when you discover your own greatest strength. When I do brutal races with my friends, I see that combination of strength and vulnerability. Their strength amazes and inspires me. Their vulnerability bonds me to them. When our spirits are open to one another, that is when they can entangle and rejoice.

It is in that moment of vulnerability that you realize that you're not alone. When you open the closet of your soul and reveal the demons within, your true friends won't flee. They will pick up their sword and do battle on those demons, even as you help battle their demons. In the end you may be weary and stained, but with a newfound radiance and joy.