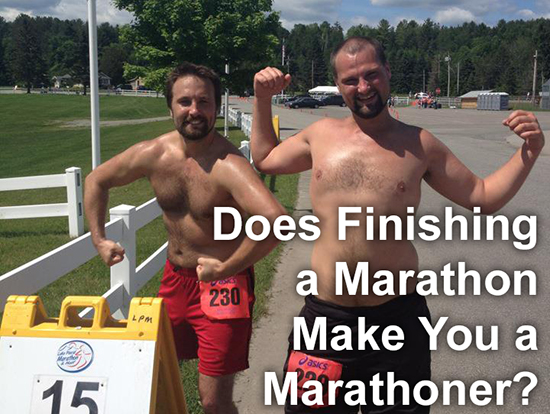 I saw this article posted a while ago: Steve Jones Raw: Starting And Finishing A Marathon Doesn't Make You A Marathoner. The first time I read it, I agreed and disagreed with it. Actually, I don't really know how I felt about it. I didn't want my head to hurt any more so I forgot about it. But then I saw it pop up again this morning. And a bunch of my friends are arguing about it. So I want to think about it, and the best way I can do that is by writing about it.

I'll start by saying what the most important part of running and marathons is to me: People. All of my best marathons where the best because of the people who ran with me or those who cheered me on. I felt pretty good when I ran Wineglass 2015 in under 3 and a quarter hours. I hung out mostly with Geoffrey that weekend and it was hilarious.

Wineglass 2016 was a much better experience, and not because I ran faster. In fact it took almost 6 hours to finish that race, but every minute of that time was worth it. That's because I paced a friend with stage 4 lung disease. And that whole weekend I hung out with a bunch of awesome LUNARs. Overall it was way more fun - but also more valuable - than 2015. And if someone came up to me and told me that me and my friend weren't really marathoners, I would've punched them in their stupid face.

Wineglass 2017 was just over-the-top amazing, because I spent even more time with even more incredible people. And the race itself was by far the best marathon I've ever run. It was just intoxicatingly fun . It felt like it lasted 2 seconds, even though it took me and Carrie just shy of 4 hours to finish. And if anyone had told her she wasn't really a marathoner, I would quite likely have murdered them.

It's pretty clear to me that my priority when it comes to running is the community and the people I have come to love. However, it's also clear that this is not the priority for Steve Jones when he runs. And that's totally OK. I just wanted to lay context. It's important to understand the perspective from which people say what they say.

A lot of people tell me I'm fast. I'm not. I could be. But I squander my potential. My training is improving at a snail's pace. I run for all the wrong reasons - or at least I used to. The reasons have changed, but they skipped right over wanting to become a super duper athlete. I want to do well, but I don't want to be the best. I don't want to get into that head space. I'll explain later.

I know I'm not as fast as I could be. That's not to say I don't push hard at marathons. I have finished every marathon I've ever started, including ones that I really should have quit. The 26.2 on the end of Ironman Mont Tremblant was one of the most brutal experiences of my life. Some races I have pushed super hard, and some I stopped trying when I realized I had zero hope of accomplishing anything.

Does that mean I'm not really a marathoner? Out of the 10 official marathons I've run, the solo marathon I ran on New Years, and the 26.2 at the end of IMMT, should I only count those where I ran fast? Or pushed hard? Guess what, I've played that game. It had one result: I hated myself. Because I knew I wasn't fast and I knew it was entirely my fault and all that because it wasn't a priority. It's pretty clear that being not just fast, but the fastest, is a priority for Steve Jones. So, again, I've written a bunch of stuff that barely has anything to do with his words.

But I'm not done yet.

My problem with what he said isn't what he said. It's that he said it. Publicly. That makes him an a$$hole. I've thought all sorts of stupid things in my life. Many many stupid things in fact. I've written some of those stupid things in this blog, and got severely chewed out by my friends. Thankfully most of my idiotic thoughts I keep to myself. They are safe there in the dark recesses of the sad angry corner of my mind.

My problem is guilt.

My problem is anger.

My problem is depression.

It's not about, and has never been about, the person I judged. It's always been about me.


I'm not saying Steve Jones pushes himself hard for this reason. I don't know him at all. Maybe he's a super cheerful guy who loves life and just likes to run fast. Although I will point out that a happy guy wouldn't go and say something that would upset so many people on purpose. But look at other athletes.

Michael Phelps is an obscenely good swimmer. He's won many many gold medals. He has also dealt with depression and low self-worth all his life. Lance Armstrong inspired many many people for many years with his amazing achievements at Tour de France. He definitely blew me away. And then it was discovered that he doped like crazy and destroyed lives to hide his secret. Mike Tyson suffered from self-loathing his entire life. Google famous athletes who've suffered from depression and prepare to cry a lot.

And many successful non-athletes have similar stories. Many actors, musicians, comedians and others have suffered. Many have committed suicide. Robin Williams and Curt Cobain immediately jump to mind. Carrie Fisher didn't kill herself, but she lived a very hard life that resulted in her death. Many have died because they pushed themselves passed the limits of their bodies. That's a form of slow suicide as far as I'm concerned. I've had dark thoughts of a similar nature myself as well.

Pushing yourself that hard is not natural. It's not. We did not evolve that way. Our minds and bodies don't want to do that. I believe that anybody who trains to a brutal degree and pursues success at any expense does so because he or she has personal demons to exorcise. I certainly did, 100%. I hated myself so I started counting calories. I hated myself so I started exercising and kept increasing the volume at a drastic rate.


I'm a lot happier now, and my body is getting stronger. And I feel myself on a continued upward trajectory. Will I continue to train as hard? I honestly don't know. Will my opinion of why people push themselves hard change? Maybe. I certainly will always push myself for the sake of people I love. I would defend them with my body. Most of the people I've mentioned above though pursued success for themselves.

It's not a bad thing to train to deal with the negativity in your soul. In fact exercise is a positive and healthy way to deal with that junk. And you can do it in such a way that doesn't result in a shortened life span. And your training can bring joy to you and those around you. And, if it does bring you joy, and you learn to love yourself and others.... Then you will not be inclined to say or write something that hurts or insults those people you love.

Does that make sense?

So my summary. Success isn't bad. It's great. Training for success is great. Sharing your success with others in a positive way is great. Having an opinion about success and what it takes to get there? Fine. Totally fine.

Sharing an opinion that accomplishes nothing except to piss a bunch of people off?

Now you're a jerk.