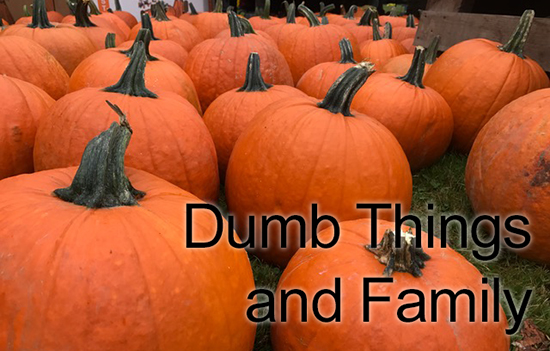 I didn't talk to anyone until I was about 23. I was home schooled until I was 10. I went through high school AND college barely talking to anyone at all. I missed the entire window of time when kids learn how to relate to other people. I finally had to Google how to talk to people. No joke. Google was around when I was 23.

As a result I sometimes feel like a strange creature in a human suit. Some of my friends think I'm a unicorn. Unicorns seem to live in solitude a lot. Frolicking in the woods. Alone. Squirrels don't make for great conversationalists. And they have those horns. So anyone will think twice about saying hi to a unicorn, because they don't want to get stabbed in the chest.

By now I have a decent idea of what to say in different situations. Decent, but not great. Around my friends, I make awful jokes, because I honestly don't know how to make polite conversation. And it bores me to death. I have a switch, and when I turn it on, I'm ridiculous. Most of the time it's off, and I'll happily stare at a tree.

I meet with my boss once a week to talk about... work stuff. We always start off with small talk. And I don't want to get fired for being weird, so I have to hack my way through this. I talk to him about trucks, because he drives a truck. I ask him about his daughter, because she's cute and people like to talk about their cute kids. I try to avoid talking about sports, because I can fake that for exactly one second. My boss is a good guy though and he's probably used to programmers lacking in grace.

I get compliments. Attention. I try to be gracious, but at the same time I'm like, "stop being nice to me! Don't you know how strange I am?!" And some of my longtime friends roll their eyes at my antics. They're like, "I know you're awkward. Stop pretending to be cool." Geoffrey has known me long enough that he often drops hints when I start seeking a bit too much validation.

But I appreciate that. I need that. Meghan recently pointed out a stupid thing I said in my blog. A thing that was hurtful. And it wasn't meant to be. But the intent doesn't matter. It was there, in all its awfulness. That's the only way I can learn, when someone tells me, "yeah, that thing you said? It was bad. And it hurt me. And here's why."

Part of the reason I was drawn to karate was because it gave me a family that I didn't have to pretend for. I didn't have to know how to say things. I just had to work hard and not ever give up. That's a thing I can do. I can push myself to the point of breaking and then keep going. Karate, lifting, running, triathlons. They're ways I can express myself without having to use my feeble language skills.

I was reminded of this yesterday and today. A couple of high-ranking yudansha (black-belts) traveled up to train with us. They didn't do it for fun or profit. They did it because we're all part of the same family, and that's just what family do for each other. They support and strengthen one another. It is their giri, their duty, as it is mine to teach and to cultivate other young minds. We have a warrior's bond that transcends the mundane.


My LUNAR family is much the same. We applaud one another for our strength and perseverance. Sure we have fun and giggles. But the respect and appreciation comes from our recognition of each other's will and refusal to surrender to pain. Our refusal to listen to our minds when they say, "maybe sit down and have some cake instead."

I'll push a karate student, sometimes to the point of tears, because I know their strength better than they do. And I will be the loudest cheerleader when they succeed. I'll pace a runner in a marathon, because what they're striving for amazes me, and I want to help them achieve their goal. I'm not threatened by the success and growth of others. I relish it. I want everyone to feel proud of themselves. And I love being a part of a family that lets me do exactly that.

And even when I say stupid things, they don't disown me. They don't get (too) angry. Because they know where my heart is at. Sometimes they just laugh. Sometimes they'll point out my error so that I can learn from it. But words are just words. Because when it matters, I'll be toeing the starting line with them in the freezing dark. I'll have their backs when the going gets rough. I'll be there to push them when they're too scared to push themselves. And I'll be there to catch them before they hit the ground too hard.

When I was that antisocial 20 year old, I never would have expected that one day, family would be the most important thing in my life. But it is, without a doubt it is. When I was young, I fancied myself my own pillar of strength. That I didn't need anyone else. But now I know, that pillar would collapse in a second without the many many supports around me. Also my pillar has a lot of dumb graffiti scribbled on it.