We Refuse to Surrender 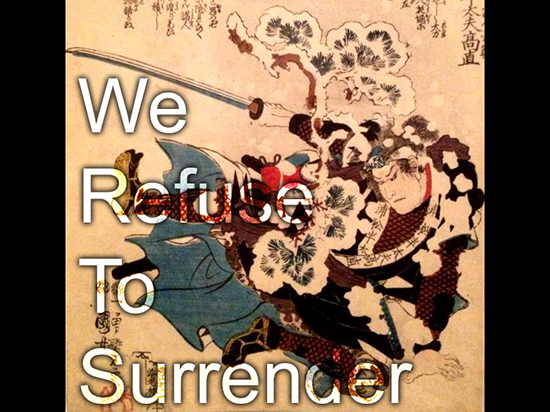 I started writing another post. I'll finish it next week. Something more important came up recently though. Geoffrey, Meghan, and I are training for the Ironman in Mont Tremblont. This post is dedicated to the three of us.

I trained stupidly over the winter. I rode the bike on the trainer, but I wasn't training. I was just spinning - burning calories. I wasn't doing any intervals or hard workouts, so I didn't build any strength. When I suddenly started doing big hilly rides in the summer, my quads blew up. The tendons that connect them to my knees have been hating me for the past couple months. I've been genuinely worried about the Ironman.

Geoffrey and Meghan have been training super hard. Their insane schedules of brutal workouts blow my mind. I was certain they would annihilate the Ironman. I still am, honestly. But Geoffrey's had a tough time lately. I won't indulge in details except to say that his training isn't going the way he'd like. So I thought, "well at least Meghan is still kicking a$$."

Then, today, she fell off her bike. Wait, that's not right. She flew off her bike when her chain slipped. And destroyed her helmet. If it wasn't for that helmet, I'd be writing a very different post. As it is, she got pretty banged up.

All three have been questioning ourselves.

I was going to send them a TXT, and then I saw this photo in our group chat. 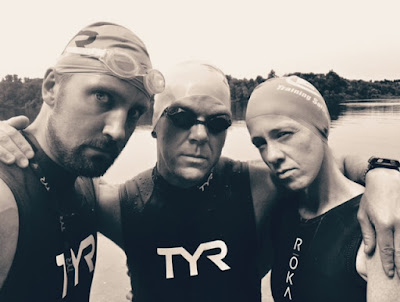 I deleted the TXT. It was going to be something whiny like, "man our training has been sucking lately." But when I saw that pic, I thought, "F@#K that. We are f&@king WARRIORS." We are BAD. ASS.

And maybe we don't feel like that right now. The tendons in my legs are sore after exercising 6+ hours yesterday. Geoffrey's probably still pi$$ed about his workouts. And Meghan is still trying to figure out if she broke anything. Not a good weekend.

But each of us have had awful workouts. We've had awful races. We've bombed. Badly. We've gotten hurt. A lot. A lot a lot. Injuries that sidelined us for months. Injuries that made us question our sanity. You know who else constantly wonder if they can conquer their challenges? Warriors.

Warriors aren't infinite heaps of strength and confidence. They may seem that way on the outside. But they're not. Inside they're stress. And pain. And an overpowering fear of failure and disappointing others and themselves. And a sense that their next battle will reveal their brittle weakness. They question themselves every minute. And then they go and fight anyway.

Success doesn't come from being perfect and utterly fearless. It comes from repeated failures and brutal insecurity. It comes from acknowledging what terrifies you the most and charging face first into it, no matter how frightening or painful. It comes from having the worst day of your life, and then getting up the next day and moving forward.

I don't want to speak for Meghan and Geoffrey. I don't really know what's going on in their heads. And maybe writing this post is unfair. But what I do know is that I aspire to be as strong as them. And not because they kill every workout (they often do but also often don't). It's not because they constantly ooze utter confidence (in their worst moments they scream and yell and throw things). It's not because every race goes as planned for them (it often doesn't). It's because despite all the hardship, and suffering, and disappointment, and rage, and constant self-questioning...

They're still there. At the starting line. Shivering in the rain, in the dark, the atmosphere an oppressive reminder of all their self doubt. Waiting for a gun to go off, having no clue whether they'll have a great day or a terrible day. They are there.

They are always there. Every time. Bodies battered, but not broken. Minds challenged, but focused. Souls tarnished, but still gleaming with determination. And hearts.... hearts that refuse to surrender. 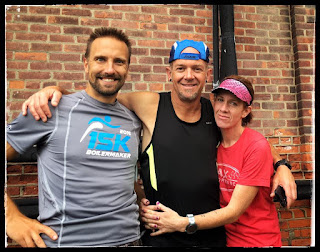