I'm not sure how to feel about yesterday's Patriot Half. Sometimes when I write these race reports I make myself sound larger than life, bouncing from one epic adventure to another. With this particular triathlon though, I oscillate between being amazed at my accomplishment... and with being disappointed with my performance.

I didn't take my training seriously enough when I signed up for this summer of Ironmans. Or rather, I didn't think about the kind of training that would be required to do well. Meghan and Geoffrey signed up, so I signed up. Part of it was ego. If they can do it, then I can too, right? The other part was just... adventure. I often sign up for races spontaneously. I did three back to back marathons at the end of last year.

There's a more subtle reason for that. If I sign up for a race at the last minute, for "fun", then I have an excuse for not doing well. I don't have enough time to train properly, or I'm not recovered from my previous race. If I sign up for something a year ahead of time, I don't have that excuse. I have to accept the work that goes into the training, work my butt off, and accept the results. What I did in the race was all me.

For my first half ironman, I didn't do badly. I finished in under 6 hours. And at the risk of sounding like an a$$hole, it was easier than I expected. But then that's the point of your training. If you do it right, the race itself should just feel like the last workout, albeit a longer one. I only decided that I didn't do that well after seeing the results. Maybe that was my mistake!

I felt good in the swim. I used to hate swimming, and I was terrible at it. Now I actually enjoy it, and I can manage an almost-average pace for 1.2 miles. I went faster than I expected in the bike and felt solid the whole time. Partly that was because I got a brand new seat and Geoffrey put it on for me at 10pm the night before the race. I can't overstate how awesome the seat is and how much more powerful I felt because of it. And of course my run was great as always: The one thing I'm good at.


The disappointment is that despite feeling strong 100% of the race and finishing strong, I was still slow. But that's a result of my training. I focus too much on burning calories, and skip out on the speed work I need. I have the endurance, and my body is made of solid concrete, but the speed just isn't there. Despite how that sounds, I don't really say that with guilt. I know this about myself. My goal was never to be super fast. It was to be able to say that I've done something that very few people would even consider trying.

I need to write this post. It's how I think things through. I only started to feel bad about myself when I saw the results. Out of 600 finishers (about 800 competitors total), I finished 499th in the swim, 452nd in the bike, and 52nd in the run overall. But I was in the top 50th% total time (probably thanks to the run). But I can't care about that now if I never cared about it before.  That's just silly.

My training for this has been endurance. Doing all of the things without gassing out. And in that I succeeded, while satisfying the second benefit of keeping my figure trim to satisfy my absurd vanity. I know my priorities are whacky, and that I squander my potential. But I've mentioned before that the most important aspect of training is to do it in such a way that it's sustainable. I have to do in such a way that I can keep going without burning out. And in that I've succeeded as well.

And of course, I've learned a lot from the training and from this race. And it motivates me. This experience is the sort of thing that gets me excited to change my priorities, to take my potential more seriously, and to look at the kind of work it would take to not just finish, but to excel. And I'm not done yet. This was only the first half. I still have Musselman and Mont Tremblant. I have a couple months of training left. I can't expect myself to be a champion the first time around. I've never been a swimmer or biker, and to finish a half-ironman.... that's pretty awesome. 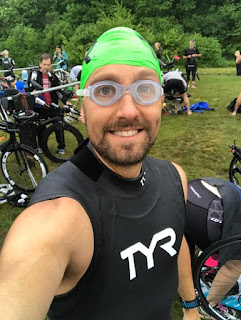 I'm happy about that. See? Writing this post has helped. I feel a lot better now. It was pretty epic. And boy did I gobble up a lot of other competitors on the run. I was flying.

I've written this much and have said nothing about the actual race. Part of it - and Meghan mentioned this in the car too - is that nothing really crazy, funny, or adventurous happened. But let me churn through my meager brain cells and see what I can remember.

I got no sleep Thursday night. Geoffrey and I left really early to get to MA. I got no sleep Friday night either. After getting our bibs, getting our swim at the Y (the lake swim was closed at Long Pond) having a late dinner, and then doing last minute race prep, we didn't get to bed until 11pm. And we were up at 3:30am the next morning.

And it was pouring. The rain was torrential. The whole day Friday and all of Saturday morning it rained. We stumbled around in the dark, water smashing the roof, not feeling very excited. We were exhausted and stressed with anxiety. And we were worried the swim would be canceled. But we've all done countless races. We can get up, get ready, and get going purely on autopilot. And we did. We got to Cathedral Camp a bit late, but with enough time. 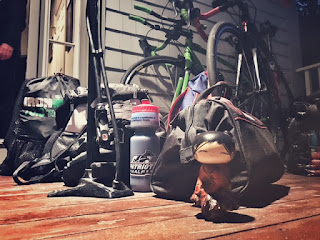 We set up our transition areas in the rain. We got our ankle bracelets and body markings in the rain. We put on our wetsuits in the rain. Then, miraculously, right at the beginning of the race, it stopped. It was supposed to rain all morning, maybe even thunderstorm. Instead, by about 7am when the race started, the rain just stopped. That helped the mood a lot. Suddenly I was excited!

Not much to say about the race itself. It was very pretty. And it was long. Very long. Although the brain has that strange power to ignore that sort of stuff after the fact. The volunteers were truly amazing. The race was exceptionally well organized. The people who made it all come together were awesome. And getting the medal at the end of almost 6 hours of exercise was an incredible feeling.

I have to thank Geoffrey and Meghan for being part of this incredible adventure. I wouldn't have even tried it if it wasn't for them, and sharing in the experience with them made it that much better. Geoffrey's daughter Aria was there, cheerfully supporting us throughout the entire time, and she made things much more fun as well. Meghan's family was amazingly generous and stuffed with us with food after the race. All the humans involved in this weekend were incredible, truly.

As always, that's what it comes back to for me: The people. I always seem to mention them at the end of my posts, and I realize they're the reason that it's all worth it. The friendship, the shared suffering, the respect, the love. We are all brothers and sisters in the craziness of life. And the people in my life have chosen to push themselves past the breaking point, and they inspire me to do the same. It makes us stronger as individuals, and makes the connection we share stronger as well. 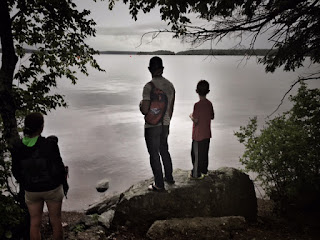 Life is pain. But when you embrace that pain, you discover how much strength and beauty comes out of it.


That's what I typed out in the car on our way back from MA while Geoffrey drove. He had his own thoughts regarding the race..... It's not really appropriate for me to say what they are, good or bad. I hope he writes his own post. From my perspective, I was blown away by what he did. I look up to him with regards to training. His dedication far exceeds my own. He's also very hard on himself. That part I get.

The training is what makes us physically, mentally, and spiritually stronger. It's really easy to focus on the results of the race. But it's just a few hours out of the year. Of course we want to do well. And of course we're going to over-analyze the results. But it barely defines us. I've had karate tournaments where I did well, and many more where I didn't. But either way, my Sensei, my students, and their families respected me and appreciated me. The same is true with running, triathlons, and just about everything.

Meghan kicked huge amounts of butt and did super well. But that doesn't surprise me. She's in a whole different league of epicness.

The long car rides there and back gave me lots of time to be pensive. Training for and running marathons - and now training for and doing triathlons - is an escape for me. An escape from life. I wasn't happy with myself, and training gave me something to strive for and something to be proud off. But I'm isolated. I love the people I've met, but I don't see them nearly often enough. 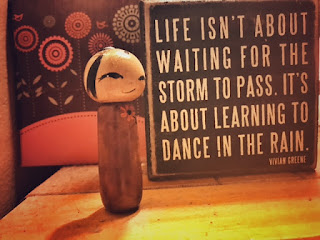 I've been thinking a lot about the future. About trying to find a balance that lets me keep training, but also lets me enjoy other parts of life. Listening to music, taking photos, spending time with people that aren't necessarily maniacal athletes. Maybe even drinking again, if I can avoid the mistakes of the past. I'm not really sure yet, but I can't ignore these things.

I push myself every day to be a better person, but better for what? Any time I feel down, I go out for a run, or a bike ride, or whatever. It's become a replacement drug. Is that healthier than what I used to do? Is it sustainable?

I'm excited for my other races this season. Those are going to be amazing adventures. But I'm also excited about being done. About sitting down and making new plans. Change is scary, but it's also an opportunity. The Patriot Half wasn't the end of a long road. It was just the beginning. I accomplished something that just a year ago would've seemed ridiculous. And that gives me hope that all of life's challenges only seem challenging in my own head.

With enough dedication, anything can be accomplished. 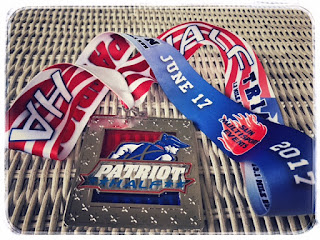