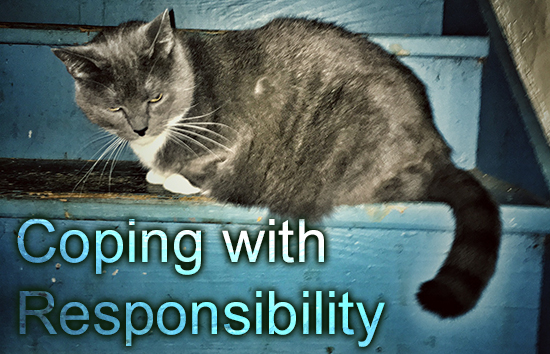 When I was younger, I avoided responsibility like it was a rabid alligator (fun fact, only mammals can get rabies... shhhhhh). I had all sorts of smart-sounding excuses, but they all came down to fear and avoidance. I only exercised when I "felt" like it, I only dated "casually", and I generally avoided doing things that required significant or lasting commitment.

I preferred to sit around and drink, go out and drink, or invite someone over for drinking and "casual" adventures (I was too much of an a$$hole to ever offer to go to their place). Again I had some smart-sounding zen reasons for this. Stuff I stole from Eastern Asian philosophy and twisted to say, "life is about doing whatever you want and not taking yourself too seriously."

Then I realized that I was a huge douchebag. That I wasn't doing anything to make myself proud of who I was. That I didn't have any goals beyond how big of a fire I was going to build for me and my dog. I was just living day by day. And it was fun. But if at any point I looked back, I realized that I'd accomplished almost nothing.


And I wasn't going to be young forever. At some point I would experience health issues (beyond hangovers). I would have to deal with retirement and life insurance. I would grow a conscious and start hating myself for all the people I'd hurt with my selfish frivolousness. And I would actually want to set challenging goals and achieve success.

Exercise and eating right requires responsibility. That's what I usually talk about on this blog. I've mentioned repeatedly that you can't depend on motivation to stick with health and fitness. And in general, I'm rarely motivated to take on more responsibility. So how do you accept it? And how do you deal with it once you've taken it on?

I've already hinted at it. You have to look at it as a good thing. You have to rewire your own brain. I've mentioned before that running every day basically requires you to be insane. Insane in the sense that you don't think the way other people do. Other people don't like to run, and they don't like to take on extra responsibility.


But you're not other people.

You want to be an exceptional person.

And the harder you work, the more exceptional you become. But it takes a long time to translate that work into reward. The donuts/whiskey/coffee part of your brain doesn't want to wait that long! It wants dopamine now! So you have to become your own dog-clicker. When you train a dog, you can't throw a treat at its face every single time it does something awesome. You teach it that a click = treat. And eventually it gets that hit of dopamine just from hearing the click.

Because you will get it, as long as you stay true to yourself and your responsibilities.


Of course, we're not dogs. Life throws monkey wrenches into our plans (beyond just distracting squirrels). The excuses creep in. We'll take a "break". We'll stop exercising because of a sore joint, with the vague promise of starting back up again as soon as it recovers (yeah right). We get overwhelmed.

I feel good when I run, or swim, or write, or shoot photos, or reach out to a friend to let them know I care, or to do whatever else I feel responsible for. But sometimes I'm just too tired to even care about feeling good. Lying down and doing nothing feels even better. That's when the guilt creeps in.

Guilt is a "bad" feeling. We don't like feeling guilty. But negative emotions aren't bad in and of themselves. We humans have them for a good reason. They're tools, to push us to act. The problem with guilt is that people use guilt as an excuse to not act. They feel that they're making up for their failures by feeling guilty for it.

"I forgot to get back to my friend. I feel so bad!"

"I totally missed that deadline. I totally suck."

We express our guilt or self-recrimination, and then the people around us say, "it's ok." Because most people can relate, and most people are nice, so they try to make you feel better. But this is validation. So we don't do a thing, we feel bad, somebody validates us, and we get that hit of dopamine.


When I start feeling guilty because I failed to meet a responsibility, I get up and do it. That's my trigger. I recognize that it's a tool. I use it as such. It's like the alarm clock on my phone. I don't like to feel guilty. And when people say, "it's ok," my immediate thought is, "no, no it's not."

It may be OK for ordinary people. But I don't want to be just ordinary. I'm striving for more.

All of this requires you to be conscientious of your feelings, and to be totally honest with yourself. It's very easy to lie to yourself. Don't. And when you stop lying to yourself, you no longer have excuses or empty validation to fall back on. And the only option it leaves you is to get up and fix the thing that's bothering you. To handle your responsibilities.

And the more you do that. The stronger you'll get. The better you'll become.