I didn't feel like swimming today. I spent half an hour trying to log into my investment account so I could get my 1099 and failed miserably. And I was tired, and sore, and hungry, and just really whiny. And I have to, like, drive 15 minutes to the pool, and there was a big hairy guy in the shower room aggressively scrubbing his manly bits for all to behold.

I went swimming. And it was amazing. I had a huge learning moment and shaved 20 seconds off my 100 meter time. That's a lot, by the way.

Yesterday it was 15 degrees. Fahrenheit. In Celsius the number becomes even more depressing. I really didn't want to run. All day I was thinking, "I really don't want to run." I even debated jumping on a horrible, awful, soul-crushing treadmill. It was so cold that polar bears were crossing town heading south for warmer climes.

I went running. Outside. I ran 10 miles. And it was amazing. I don't know why but it was just really great.

I never want to ride the stationary bike for two and a half hours either. That's just a really long time to have my balls crushed. But then afterwards I get to eat a bathtub full of ice cream.

But knowing that I'll feel good after a workout doesn't really help me before a workout. I've had plenty of terrible workouts, so it's far from a guarantee. And I don't have to eat ice cream. I can just not exercise, and eat a normal meal like a normal human.

If I only exercise when I feel like it, I will literally never work out. It's really rare that I'm actually motivated to go outside. Usually because it's a gorgeous day, or I'm doing it with a friend. But it's the dead of winter right now, and there's nobody around for me to have adventures with. So it's just me, tired, suffering from a bit of Seasonal affective Disorder (ie. hating winter), and often freezing. 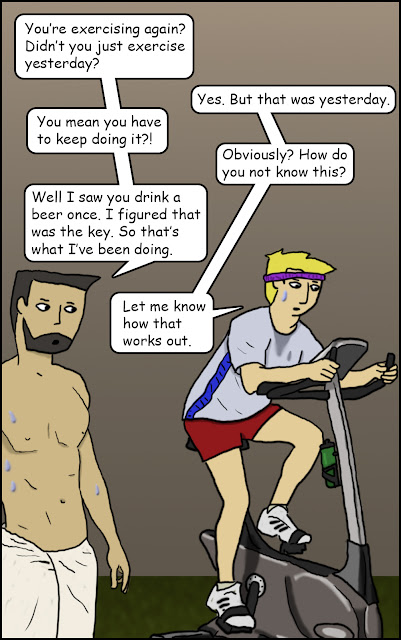 I have no problem exercising every day. I may b*tch and complain, but I get up and I go do it. Every time. Sometimes I even exercise when I really shouldn't, like this past month when I had just the most horrible thing and exercising made it ten times worse.

Most of the folks who read this are probably already bada$$ athletes, and know what it's like to be sore or exhausted and kicking patoot anyway. But if you're one of those who struggles to get going in the first place.... Well, I'm going to be a jerk. The reason you struggle is because you treat working out as something you want to do, rather than something you have to do.

If you want to exercise, it's going to lose out every time to the other things you want to do which don't involve sweating or freezing or smashing your body. Like watching TV. Or reading a book with your cat (if it's literate.... otherwise in the proximity of your cat). Or eating an entire thing of Oreo cookies and then staring at the empty tray with a slight frown.

However, if you treat exercise as something you have to do, on the same list as going to work, doing your laundry so you don't smell like Oscar the Grouch's socks, or grocery shopping so you don't die, then it's no problem. It doesn't matter how you feel. It doesn't matter if you're not in the "mood". If your kid is sick, you stay up all night wiping her nose, and then go to work (after drinking ten coffees). It doesn't matter. You may hate yourself afterward, but you just do it.

Because you have to.

How do you get to that point in the first place? You have to be kind of crazy. You have to convince yourself that working out is as critical to your survival as earning a living and and putting digestibles into your body. Which, for some people, it is. But even if that's not the case, you just have to pretend. I mean, you don't really have to work at a job. Plenty of people have super sh!tty lives and keep on kicking. If you lost your job and your house, you'd be fine. You just wouldn't be able to afford bags and bags of Oreo cookies anymore.

And because you chose it, you have to do it.