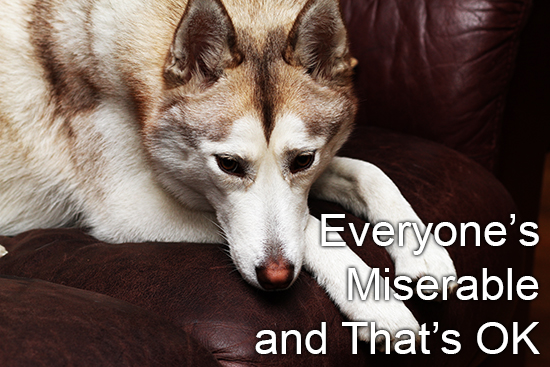 There's a lot of things that can make someone miserable. Work. Family. Health or fitness. Money. The person you're with. Or the fact that you're bitterly alone. Or maybe that time is flying by at warp speed and you feel like you haven't accomplished any of the things you wanted to.

That's a lot of possible reasons, and I'd wager that at least one of them applies to you. I don't know you, but I'm reasonably certain that something makes you unhappy.

Feeling bad isn't OK. It kind of sucks. But misery pretty much defines being human. And you're not the only one who experiences it. Trust me, you really really aren't. So when I say it's OK, what I mean is that you're not the only person who fails at life sometimes (or a lot of times).

Social media is bull$hit. 100% of what people post on there is a lie. I'm not even going to say 99%. Because then you'd be like, "oh, so there's a 1% chance that Susie with her perfect family and trips to Italy really is that happy." No. She's not. It's f@&king false.

I can go up to someone - a friend, acquaintance, anyone - and have this conversation.

"How's the thing?" I ask, where the thing is their job, or loved one, or new puppy, or literally anything.

"Eh," they reply with a forced smile.

"It kind of sort of makes you miserable."

And then there's that moment, where they feel like they should lie, keep up the social ruse. But then there's that other part of them that desperately wants someone to know how much the thing really sucks. I've had a puppy, and yes, they really suck that much. F@&king obnoxious little a$$holes.

I wasn't going to post this. I was like, what is this bull$hit? I'm not even cranky right now. I was a couple days ago. I had a headache, which translated into, "my life is awful right now. And will be forever. Unless I start drinking again." It was a bizarre thought process. And then I forced myself to get out of bed and run 8 miles. Which did nothing for my headache, but at least helped me scatter my thoughts.

But as my mouse pointer hovered over the delete button (it didn't really; I'm being metaphorical), I saw a post come up on Facebook (which would be impossible, since it's in another tab; what I really mean is I was staring at Facebook the whole time like the useless sack of poop that I am). Also, parenthesis? Whatever.

Anyway, a friend of mine posted, "What's your biggest concern in life right now? (No jokes, please)". It's been up for one hour - one - and it's up to forty serious replies. Money. Loneliness. Depression. Angst. The future. I'm being vague on purpose, but you get the point. And this friend is a comedian. Like, a stand-up comedian. So this isn't a bunch of people who circle-jerk each other with sadness all the time. These are folks who are normally expecting humor, but had absolutely no problem answering a question about why their life sucks right now.

And I see plenty of stuff like this all the time from folks who are normally positive and cheerful. I mean, we typically use Facebook to post the best stuff, because we want our friends to be jealous and sad about themselves. But sometimes we just feel so down that we puke it all over the digital world.

How is this supposed to cheer you up? I'm saying don't get stressed. Or more specifically, don't get stressed about being stressed. I know, that sounds like the stupidest thing anyone has ever written. But you're going to feel inadequate, insecure, and unhappy, and that's just a thing that's going to happen. There's no solution.

I'm in the best shape I've ever been in my life. All the various pieces of my life are generally getting better every year. I make more money and spend less than I make. I don't drink anymore. I have a lot of awesome people in my life who make me feel loved.

I'm also more miserable than I've ever been before. Because I'm stuck in my own stupid head too much. The more I think, the less happy I feel. And that's because all of the life stuff, it's irrelevant. I mean, being too poor to feed your kids matters, yeah. But whatever is going on, you get used to it. You deal with it. We humans are awesome at that.

It's only when we stop and think, that we're like, "ugh, this is all super terrible." When we compare ourselves to others. Or look back on our own lives and compare the things we've experienced with the list of things we wish we'd experienced.

It's all in your head.

If you can fix something, great, otherwise just move on. Dwelling on something that can't be changed just makes you sick in the inside parts of you.

Obviously, it's not that easy. That's why I exercise so stupidly much. Anytime I'm out beating pavement with my feet, or beating iron with my hands, I'm not in my own head. I'm doing something. Something that makes me feel good. And that's the best you can hope for.

Fill your life with as many things that make you feel good as possible. The more of these things you have, the less time you have left to feel bad. Because no matter how many good things you have, you will always want more. That's just another fact of being human. It doesn't matter if you have a thousand or only one. It's enough.

And if you're in a funk that you simply cannot escape.... that's OK. That's totally fine. Be in a funk. Lie in the dark. Stare at the ceiling. Churn in anguish. It's totally 100% OK. You're not doing anything wrong. You're being perfectly human. Doing what humans do.