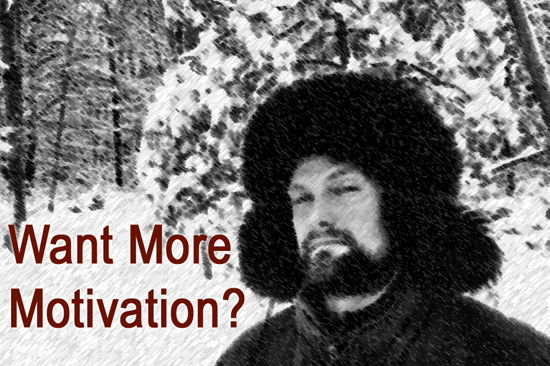 I mean, do I love my cat? Or do I just feel responsible for her because I picked her up from the Pet Adoption center in a moment of loneliness and now I have to keep her alive. Because not alive is bad. I believe I love her, at least when she's not eating my flesh. But she's just a wad of fluff that eats, poops, and lazes about all day. So who can say for sure. She's getting pretty fat too, and I'm a harsh judge of that sort of thing. Maybe I'll show her my blog.

Some would say that I'm very motivated. I get up at 6am every day to lift weights. After working all day I then run. At least 50 miles a week. And I write and teach and pursue many hobbies and spend time with people I love (or at least I want them to be alive, like my cat). I'm always busy, usually to the detriment of getting sufficient sleep.

On Monday morning I got up at 4:45am and ran 8 hilly miles. Some would argue you have to be pretty frickin' motivated to do that. In fact I was supposed to run with two other friends. It was their idea actually. But when I pounded obnoxiously on their door in the middle of the night, they strangely changed their minds. So maybe motivation DOES matter.

Alright, so for the sake of this post, how do you build that motivation?

Motivation is a muscle. You lift weights to get stronger. You run to get faster and farther. You.... type, to get better at, um, computering. Motivation is the same. If you don't practice at it, you lose it. But if you exercise it every day, you'll get more of it.


We humans only have a finite amount of motivation per day. Once you run out, that's it. You're fried. All you can do is stare at a small screen while colors and sounds drown your senses. Even that sometimes is too hard, and you stare at a wall, wishing blissful unconsciousness would sweep you away. This is often the point where my cat demands my attention, giving me all the indications that she will drop dead if I don't give it to her, right away. But I digress.

Most people want to be fit and healthy. But most people also want things, like, now. So what often happens is they make a huge and sudden change. They make a resolution to go to the gym every single day, or to eat only crackers and water chestnuts. But going from zero to superhero in a single day is impossible. You will tap out that small supply of motivation instantly. And before long you're back to exercising your arm lifting the remote control and "dieting" on pizza and ice cream.

If you want to build a stronger chest, you can't jump from benching 100 pounds to 300 pounds in one day. You have to increase the weight incrementally. And if you want to build more motivation, so too do you have to push it in small steps. I know, if you decide you want to lose 50 pounds, cutting out soda and walking a mile a day seems almost pointless. But that's where it starts. And that small step is easy. After that you cut out cookies, and walk two miles. After a while you cut out all processed sugar, and start running. Sure, you won't lose those 50 pounds in a month, but you will make sustainable changes. You will change your lifestyle. You will change your identity.

I didn't go from hanging out on a couch all week to exercising over 10 hours a week overnight. If I tried that I would have broken in half, and then given up. It took me about 6 months to lose 40 pounds. It took me a few years to run a good marathon (not counting my first one that almost killed me). It's taken me almost half my lifetime of lifting weights to get to my routine today.

To a lot of people, "years" is a dirty word. Even "months" sounds waaaay too long. That's why so many advertisements say, "lose weight in seven days!" Even though they're total lies. But that's what folks want. Fast. Easy. Suffer for a week, become a Greek god, then be done, forever. Unfortunately sculpting your body isn't like building a birdhouse. You don't need to add curtains or solar panels to the birdhouse. The birds don't care.

Most folks want the easy way out. They sign up for fad diets and exercise routines because they sound fast, fun, and easy. They want to do things that don't require motivation. Unfortunately you will make zero progress that way. Being told that one must spend months eating healthy and working hard every day though is not appetizing at all. You wouldn't sell nearly as many eBooks or DVDs if you told the truth.

However, if you train your motivation, those challenges become a lot more palatable. Running for an hour isn't a big deal to me. Getting up at 6am is normal now. Eating within my calorie budget is automatic for me. But all of those things used to seem like insurmountable challenges! Running just one mile used to be very hard. Getting up in the morning used to be awful; I would get up literally 5 minutes before I had to be out the door for work (do I brush my teeth or put on my pants? Aaaarg!). And trying to lose weight was always a struggle.

All of those things are totally normal for me now.


I don't magically need less sleep now. My body's metabolism hasn't suddenly improved. An hour of exercise is still an hour of exercise. So what's changed? My threshold for how much I can do - the limit of my daily motivation - is much higher now than it used to be. Because I've been training it every day, the same way that I've been training my body. Something that used to be a great effort in the past seems much less so today.

You can achieve any goal you desire. Not in one day. Not in one week. Probably not in one month. Maybe not even in one year. But you can. And if you think that's too long to have to wait, just think. If you had started running, or lifting, or... computering, a year ago today, where would you be now? Looking forward, it seems like a long time. But look back at how much of your life has already passed by, and how different it would be now if you had spent that time differently. Suddenly a year doesn't seem like such a big deal.