Give Yourself the Gift of Strength 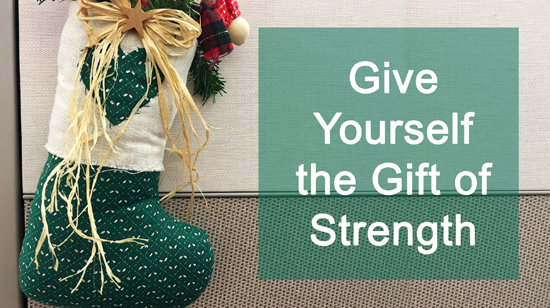 Getting gifts for folks is hard. Nobody really wants a talking toaster. "Rye? I love rye! Give me that rye! Nom nom nom. Just kidding. I'm not really eating your bread. Here you are. Toasted to perfection! Please love me."

Something most people do want is to be fit, to be healthy, to be attractive. Unfortunately you can't exactly put that in a box and hand it to them. "This is exactly what I wanted! I was so tired of being fat!"

I mean, you could get them a three month gym membership. But they'd likely flip the card over several times hoping it's actually a three month Netflix membership. Then they'd fake a smile and say, "thanks, I'll totally never use this. Good job throwing away money and making me feel shitty about myself."
But, you can give yourself that gift. And you don't even have to wait for the holidays. You can give it to yourself today. You can give it to yourself right now. Sure, it won't give you the kind of instant gratification that a hamburger or a new TV would. But it's a gift you will thank yourself for - for the rest of your life.

But we're all addicted to that instant gratification. Cheap treats. Fast rewards. We want it NOW. We don't want to have to work for it. We don't want to put in all the effort to get something months later. Nobody would buy new pants if they couldn't wear them for six months. "In half a year, I'm going to look awesome!"

That last quote was supposed to be a joke referring to the pants. But it's totally true when it comes to exercise. If you start a new routine, and stick with it, you will look awesome in six months. Sitting right now, reading this, just pretend that six months ago you had started doing something new. right now you would be pretty good at that thing. You would notice a big difference in yourself. If you had started it six months ago, you'd be reaping those rewards and thanking yourself right now.


But it's never too late to start. Unless you're 90 and have to have all your food pureed first, you still have plenty of time. People often have an excuse to wait. "I'll start once I have more free time." "I'll start when it gets nice out." "I'll start when I can afford fancy pink running shoes." "I'll start after I've defeated this tentacled monster from beyond the cosmos."

There's always something. I don't know if these folks actually believe that at some point in the arbitrary future, they will suddenly want to work hard on a daily basis. More likely it's because they don't actually want to spend hours every day sweating and aching, but will pretend like they do. "Yes, I absolutely would love to get up while it's still dark and work out despite my whole body feeling broken. That sounds really lovely. I'll start as soon as I've finished binge watching Orange is the New Black. Also there's all this ice cream I have to finish. But seriously, right after that."

No. It will never happen. If you're not willing to start right now, then you never will. I mean, I still don't "want" to get up at 6am every morning to do deadlifts. I don't "want" to run after work when it's dark and it's raining. I don't "want" to go to the gym on a Saturday some time in between pancakes and beer. But I also don't have any legitimate excuses not to. Any time I make an excuse, I'm always dead honest with myself:

- "I won't do it right now because I'm totally willing to settle for mediocrity."

- "I'd rather stay in bed, even though I'm not actually going to get any more sleep and really I just f@*king suck at life."

When I put it like that to myself, I just go and do it. What difference does it make? If I don't exercise, I'll just do nothing instead. There's a zero percent chance that I'll do something else meaningful. Actually, there is a difference. The difference is that if I don't get up and exercise, I'll be weaker. Physically weaker. Weaker willed. Weaker in spirit.

I gave myself the gift of being strong. It's a gift that grows better every day, and that I'm increasingly thankful for every day. This is one gift I have no plan on exchanging. And it's one that anybody who wants it can have. Kind of hard to pass up when you think of it that way, eh?
Posted by Peter at 11:26 AM