You Can't Run from Relationships 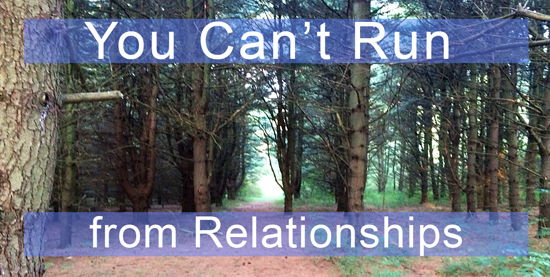 I run because it makes me feel like everything else in my life is going OK. But running isn't a get-out-of-jail-free card.

If I did happen to be in jail, I would run circles in the yard, and for a while I'd forget that I didn't pay for those running shoes and six gels. But I'd still be in the same plight.

In particular, running doesn't magically make all your relationships awesome.

Running is something I do to make myself a better and stronger person. I run so that I'm more able to handle the stresses of life. I run so that I don't get angry at the people I love for stupid reasons. Once you get over the honeymoon stage of a new relationship, you start thinking, "I've told this person a million times not to leave their disgusting sweaty shoes on my sofa, and yet there they are! Every day! Why are they so stupid?"

People f*&k up all the time. I especially seem to have a double dose of f@#k up. Maybe even a triple dose.

I forget things all the time. My memory is prodigiously awful. I try to be conscientious of all the things I do that piss people off. But that is a huge list! It's not so much that I'm a jerk, it's just that I'm lazy. I'm not going to put my sopping underwear in the hamper when the kitchen table is so much closer!

But for the lovely lady who comes home from a long day of kicking ass and chopping wood, seeing that "fragrant" heap on the table is just going to push her over the edge. She was hoping for blueberry pancakes, but no! Trousers!

And after that happens enough times, you start to think the other person is doing it on purpose. "He knows I hate that. He must be doing it on purpose. Why? Why, trousers, why?!" And if she says, "don't leave your boxers on the kitchen table. That's where I eat." Or maybe I say, "by the way, I didn't mean to gross up the table. I had them draped over my head and they fell off." If one of us says something, then it'll be fine. But often it doesn't get mentioned. And then resentment happens.

Resentment is the number one killer of relationships.

It usually comes from a lack of communication. A tiny thing happens. No big deal. You don't mention it. Then it happens again, or something else happens. It builds up a bit. But you're still not ready to rage-punt any puppies. You go about your business. And then one day, you come home, tired and cranky, and there's a steaming surprise, adulterating your vision.

And that happens both ways. Bob gets resentful. He gets all moody and shitty. Then Sally feels him being shitty and gets pissed off that he's being so pissy. And now they're both seething with anger, yet not saying anything to each other. It builds up in their own minds. An innocent injustice gets blown up to, "clearly this person wants to cause me injury. Well fine! He wants a war, he's got it!" POW, resentment.

Bob loves Sally, and Sally loves Bobs. But they forget that. They don't remember all the awesome reasons they fell in love. She just knows that he's being a douche, probably because he secretly hates her. And Bob just knows that she's being a snot, probably because she's ready to kick him to the curb. And it's for a super dumb reason. But they each think it's, like, a super serious hard core relationship apocalypse.


We often wait though. If things are going well, we don't want to rock the boat by calling out some minor annoyance. But then, the longer we wait, the harder it is to bring something up. We just swallow it down, hoping it'll go away on its own. But it doesn't. It never does. It just lingers like an angry asshole.

And often it only comes out in the form of a shouting match. And usually it's over something that can't possible be that horrible. But the bowl of refriend beans left in the microwave is just the straw that broke the camel's back. But if Sally says, "OMG beans again?" Bob will think she's just gone insane. He's been quietly boiling for the past few weeks too, and in that moment he's incapable of being sympathetic.

Because when you're that angry, it's hard to see past your own feelings and try to appreciate why the other person is so upset. "Hmmm, it's probably not actually delicious beans that anger her. She must be upset for the same reason I'm upset. We haven't really been talking, and both of us have been affected by that distance. Poor Sally, I've been so unfair to her."

Instead it's, "I'm going to jam these G@dd*%n beans down your swollen gullet!" Hold on their bucko. Let's not jam any food items into any orifices. Take a deep breath.

You have to talk. I know, it sucks. Especially for us men, we hate whining about dumb things. We prefer to be manly and stoic. Right up until we explode like preschoolers who've had their plastic dump truck taken away. And ladies, they're subtle. They'll say, "don't tickle me when I have to pee." And to the guy it sounds like, "teehee, you're being cute, teehee." But what she really means is, "seriously, if you tickle me one more time, I will break your ribs."

Not only do you have to communicate, but you have to be aware. If this person who fills your life with joy is suddenly giving a smaller portion of joy than they used to, then maybe something is up. Maybe you should ask. "Hey hotstuff, by any chance have I been an asshole lately? You seem quieter than usual. Oooooh right, I haven't fed the cats for a week. Um, they're still alive, right?"

For the most part, it takes swallowing your own ego. I'm going to tell you right now, all the things that seem super important to you, are not. At all. I guarantee you that all the shit stewing around in your head all the time is really stupid. It's spun up out of nothing. Your friends don't all hate you because they didn't invite you to the movies. Get over yourself.

Any time you get upset at someone else, instead of thinking, "I'm so mad at this person!" Instead think, "why am I mad? Is it possible that they're just as mad? And justifiably so? What's the best way for both of us to move forward to a positive place?"

It's hard. It's super hard. Our caveman ancestors just clubbed each other with rocks when they were mad. Their communication was limited to, "aaaaarg! Rock time!" And we still have a very fat dose of those reflexes in our genes. It takes a LOT of practice to get past that. And you'll still find yourself wanting to choke a rooster every now and then.

And I'm just as guilty over it as anyone else. I write this stuff not because I'm a Zen master at all things (all that meditation would drive me crazy anyway). I write it as much to remind myself as to help others. Because I take things too personally too. I read too much into what others do and say. I allow things to balloon in my head the way my belly balloons if I don't exercise.