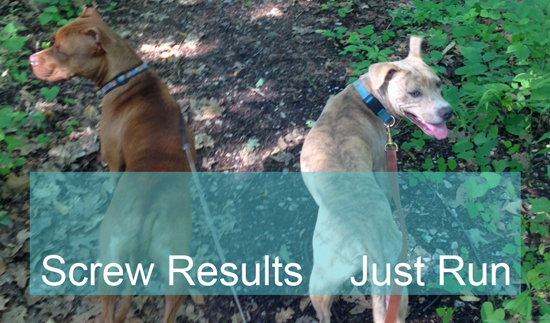 Running is hard enough without piling on expectations.

You’re already beating yourself up physically.

Why beat yourself up emotionally too?

That’s dumb. And you’re dumb for doing it.

Just kidding. You’re awesome for running. And I’m guilty of it too. My last half marathon sucked because I thought I was going to run it fast and instead I disintegrated like a snowman in August. Actually, that’s pretty much exactly what happened.

I was the snowman. Melting, oozing, and collapsing in slimy globs. And the whole time hating myself for how shitty I was doing. That’s the worst part: Switching my focus from my stride to calling myself ever more creative obscenities. “You’re a stupid asshole; a slow fat asshole; like a dumb… fat… pumpkin. Asshole pumpkin.”

It doesn’t even make sense. But when I’m mad, I start frothing and raging incoherent nonsense. Which only makes me madder. See where this is going? And before the word “mad” meant “angry”, it meant “insane”, which is even more appropriate.


Goals are good. They give you something to strive towards. Expectations are bad. Because if you fail to meet an expectation, you feel like you just let a cute puppy die. And meeting a goal stops being something to celebrate with pizza and ice cream. You just think, “yeah, that’s right I beat my goal time! Otherwise I’d kick my own ass!”

My friend Geoffrey keeps telling me how fast he thinks I’m going to run the marathon we’re training for. And every prediction he makes keeps getting faster and faster. And the whole time I’m thinking, “ugh, my only goal is to not die.” And if I die, well then I don’t have to worry about feeling bad. Otherwise, my plan for that weekend is to eat and drink a lot, run a lot, and then eat and drink a lot more. And it’s going to be freaking awesome.

Don’t run with any sort of prediction or desired outcome in mind.

Run because you run.

You’re a warrior. A viking. A king (or queen) among mere mortals. You run because that’s who you are. Your heart pumps pure power. Copy machine breaks at work? YOU TEAR IT TO SHREDS WITH YOUR MIGHTY PAWS. Unemployment check to small? YOU DEVOUR IT AND SHIT OUT ROCKET FUEL. Person in the next jail cell over too loud? YOU TERRIFY THEM INTO SUBMISSION WITH A ROCK SHATTERING ROAR.

Ok, maybe I went off the rails there. But the point is, miniscule life issues are nothing to you. You conquer the world every time you lace up your shoes. You conquer pain, fatigue, and suffering every single day. You’re a machine of conquest. Your body and soul are pure strength.

On many sites and forums within the mystical tentacles of the interwebs, I see folks asking questions like, “how do I lose 80 pounds in a week?”… “How do I benchpress a medium-sized yak in a month?”… “If I drink half a glass of milk and lift my cat, will I look like Arnold Schwarzenegger?” (I will literally never learn how to spell his name without googling it.)

These people are doomed to failure. When you have such lofty expectations, you can’t help but fail them. And it just becomes an excuse to give up. “Well, I lifted a bison, but my real goal was a yak. I quit.” (I’m not sure which one is heavier. I know yaks are more furry, which may up the challenge factor.) Maybe you’re not expecting to halve your pace in two weeks, but even minor expectations set you up for constant disappointment. And all those guilt-burgers you consume will make you chubba-lubba.


Stop it. Stop. Next time you feel like whining, just go running instead.

You’re accomplishing something that most people wouldn’t even try. Most people give up just thinking about it. “I can’t do that,” they say. Or, “I will never be as fast as Bob in accounting. Why would I humiliate myself?” As soon as you picture the finish line, it suddenly looks very far away. Don’t. Just picture the next stop. “Run around the block? I mean, I’m pretty sure I could do that with two broken legs.” Hell yeah you can, double-cast man!

It has to become a part of who you are. Not for any specific purpose. But just because that’s your identity now. “Why do you run?”

“Surviving would be nice. Hopefully they’ll have some beer left by the
time I stumble across the finish.”

“I wouldn’t escape being an entree in the cheetah restaurant.”

I don’t think cheetahs have restaurants. The world is their restaurant. And the world is your track. You own all of it. That is your power. Roads, forests, hills, mountains. Heck, even the bottom of the ocean, if you have one of those oversized scuba suits (Marianas Trench Marathon? SIGN ME UP!). None of it is out of reach for you.

And it’s not because you demand success from yourself. You don’t think that far. You just do it because you’re awesome. And anything you accomplish is already leagues beyond most of your neighbors. Who cares if you didn’t beat your mile time. John Johnnerson next door considers it an accomplishment to get off his couch.

The only person who matters is you. Choose to feel amazing. Because you are. You so freaking are.
Posted by Peter at 11:31 AM