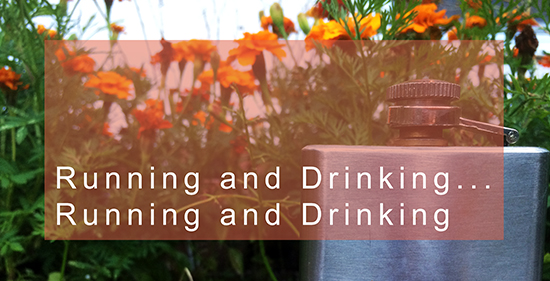 Let me be honest. I’m quite buzzed right now. I won’t use the word “drunk”…

Also I’m watching Batman. No seriously, I needed to play something I’d already seen so I could focus on writing.

But this is the beginning scene where Joker robs the bank. It’s pretty action-packed. “You and your friends are dead!” Seriously man. I picked the wrong movie.

Running turns you into an alcoholic.

OK for real, this movie is distracting. I’m drinking a delightful and smoky reposado. After drinking…. I don’t know how many Coors Lights. Normally I’m a pretentious micro-brew man, but Pixie is out of town, so I’m spoiling myself with the “dessert of beers”.

The batmobile has a “loiter” mode. That’s my only mode. As I’ve mentioned in other posts, I count calories. This used to mean that I would have to stop eating and drinking after a certain point so I wouldn’t go back to “fat Peter”.

But I run a LOT now. And I get to a point where I’m just too full to eat. I made a pot of minestrone soup earlier. And I ate ALL of it. Harvey just disarmed the guy on the stand who tried to shoot him. “If you want to kill a public servant, Mr. Marone, I suggest you buy American.” Man. Awesome.

I just get too full to eat anymore. But I still have room in my budget for calories! And I have to fill them out. Most runners are just made of bone and sinew. But unfortunately, like an asshole, I lift too. So I have all of this meat I have to support too.

I know I sound like an alcoholic coming up with elaborate excuses to support his addiction. And you’re 100% right!

Or it would be. But I still have to write 700 more words so that the search engines give me some love. I hate this SEO bullshit. But the fact is….

I’m running almost 60 miles a week. That’s 6,000 calories, if I was running super slow. But occasionally my heart rate rises (I’m still trying to beat my record of 187 beats per minute). So it’s more than that. If I didn’t fill up those 6,000+ calories. I would lose two pounds a week. Two pounds!

So after I get so full that I literally cannot jam any more physical substance into my body without exploding, I have to turn to liquid calories. Fluid magically fits into the nooks and crannies remaining in my belly. So that I can hit my budget. My big, bloated, drunken budget.

Oooooh, this is the meeting with all the mobsters where the Joker stabs the guy with a pencil. I have to watch this scene for a minute. “And I thought my jokes were bad.” Haha. Never gets old.

Unfortunately, I’m so fit now, I never really pay the price for my excess. Pixie pays the price. She has to deal with me falling asleep before my head finishes crashing to the pillow. But I get sleepy. It’s a terrible pattern. Run, drink, crash, repeat. If I didn’t work full time too, we could maybe have picnics and swim under waterfalls before I turned into a piece of shit.

She’s excited for when I’m finished with my marathon, and frankly, I am too. I’m looking forward to eating dinner, making out, reading a book on the couch with my arm around her, maybe making out some more. I’m not really an adult, so I’m not sure what happens after making out. I heard it’s nice though.

But my life now is just concrete, beer, concrete, tequila, concrete, whiskey, and so on. You get the point.

I eat. I eat a lot. Geoffrey and I did a long run today. Afterwards, I had fish tacos. And that came with steak fries. And we were still hungry so we got extra fries. And also we had beers. And then I came home and made minestrone soup and drank more beers. And then my stomach swelled past the table so I had to switch to tequila.

I feed the pets. They’re alive and happy. I even walked Sally to the pond. She took a massive poop, which is good. She’s very picky about her pooping. She won’t let on that she needs to go. And then suddenly you find a gift by the front door. But I took her on a walk, a walk on my sore achy legs, down by the pond, and she had a delightful epic poop. It was so good that I felt good just watching her. Come on, don’t lie. You watch your dog poop too.

Bruce Wayne absconded with the entire Russian ballet. That bastard. He’s just rich. If I was rich, I would buy an awesome suit and kick a bunch of ass too. “You want to know how I got these scars.” And now the Joker again. How am I even still writing?!? “Why. So. Serious.”

I have a smile on my face. I can’t help it. Running wipes out all of the ills of the world. And if any of them remain, nagging at the corners of my brain, alcohol gives them the killing blow. It also takes a few brain cells with it, but I’m not in school anymore, so I don’t have to worry about remembering things or being able to do basic math anymore.

I seriously had to pause the movie. Batman is in China, using some stupid f*$king super-technology to kick even more ass. I had to stop because you, poor reader, would have to deal with just too many quotes and incoherent bullshit.

Because I’m not getting any more sober. Just….. FYI.

I honestly don’t know how regular running folks deal with it. OK, I do know. Folks who only run a few miles a week don’t have to worry about food and such. And folks who run a huge amount…. Usually weigh like 130 pounds. I’m some bizarre beast, who weighs a lot and runs a lot. And I like having stupid abs, even though you can’t see them under my shirt, because I’m stupid. And more stupid.

And life doesn’t punish me. Running this much makes you stupidly fit. So if you’re a new runner, make a note of that, in case you need encouragement. I don’t get hung over anymore. I go to bed late and still wake up when the sun rises. But I’m not sleepy at work. And I get home ready to run. And I somehow find the motivation to write blogs about Batman (which is what I should have made my blog about… then I’d have a ton of readers!).

I have no clue what my point is. I may have had a point when I started writing, but I honestly don’t remember it anymore. When I was much younger, I did stupid things, like driving drunk. Don’t worry, I got caught. So the vigilante in you can relax. These days I just drink on the couch. And often pass out on the same couch.

Maybe my point is that before I started running, I was scattered. I had all of the same vices. I may pretend that running gives me an excuse, but plenty of us drink just because it feels good.

Almost as good as ice cream.

Running gives structure to my many vices. It forces me to be very aware of them. It forces me to admit how much I suck. But I’m OK with sucking. When I run, I feel like a superhero. And when I drink, I can just pretend I’m satisfying the calorie requirement for my superheroism.

I’ll never go on a vegan diet. I’ll probably never stop drinking. But I’m still going to be healthy. Because I exercise like a maniac. And even though I fancy myself to be a moderate type of guy, the fact is I only average out to moderate. But you know, there’s plenty of people who live in the extremes. That’s our nature.

So my obsession with running, in its own weird way (its as a possessive pronoun doesn’t require a quote), makes me sort of less obsessed. All of the craziness in my life balances out. As Mr. Burns says, “I’m immortal!” If you don’t get the reference it won’t make any sense.

“Any psychotic ex-boyfriends I should know about.”


Sober update 8/24/2015: Nope, I wasn't making any point. I think the post gives you the, uhhh, gist of how my life is currently. And true to what I said, I woke up not hung over and reasonably well rested. Although I'm really full. And really gassy. My coworkers are going to hate me today. I'll add though that I'm slightly better rounded than I made myself out to be above. Slightly.
Posted by Peter at 6:36 PM